Those Below - Daniel Polansky 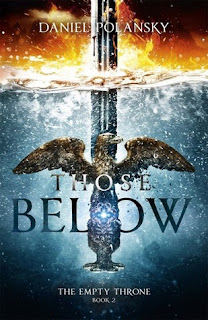 Those Below is the second half of a duology by Daniel Polansky, the sequel to his rather good Those Above, which I talked about at length a little while ago.

It seems like the focus is on the Roost this time around – the citadel of the effectively immortal, thoroughly inhuman Those Above. But where the last volume showed us the Roost as a calcified, stratified society, ruled by fear and indifference, here the roots of that society are being gnawed away. There’s a sense of seething rebellion as the text opens, a claustrophobic, overheated rage, which is looking for direction. Polansky  gives the reader a world one misplaced word away from explosive violence – and then shows us the individuals happy to use more than just one word.

The emotional atmosphere is masterfully drawn, but it’s only part of the whole. The Roost is a thoroughly unpleasant society, one where all the power resides in Those Above. It’s a society where those who enforce the laws have no part in them, where even the most effective human administrators are regarded as pets. It’s a society where the few have not only turned their backs upon the many, but don’t even see them as worthy of attention at all. It’s something almost beyond feudal – though there are some interesting comparisons drawn between the top-heavy society of Those Above and the governmental structures of the nations around them. Whilst the society as shown is untenable, the question of whether anything would improve if it were torn down is one which surfaces throughout the text – the growing sense of revolution perhaps tempered with the knowledge that any successor government, whilst human, might be no less uncaring.

At any rate, Polansky brings the Roost to a bright, jewelled, horrifying kind of life. Outside of it, the Aelurian army continues on the march. Bas and his gang of hard-edged misfits prosecuting a war orchestrated by their senate – and of course, the machinations of our favourite aristocrat from the previous book. We get to see some of the melancholia in Bas’s character here. His curious relationship with the Seneschal of Those Above tasked to keep an eye on him is affecting and tragic. In a book filled with cultural divides, their interactions seem the closest anyone comes to a genuine bridge – and even then, the metaphorical bridge is, at the very least, on fire. He’s still cold and clinical, a man inside of himself – but there’s enough chinks in the armour to give us something of the reserved character behind the mask, and that’s great – and makes his trudging through mud, cold and the occasional siege far more interesting.

The rebellion continues to gather pace in the Roost. Thistle, now renamed Pyre, is at the forefront. Having watched the shaping of a zealot in the first volume, his shifts in character here are built on that foundation. Pyre is a man filled with righteousness and faith, called upon to do some fairly ugly things.  His certainty takes a few knocks over the course of the book, and watching him tie ambiguous strands of character into his existing net of truths is fascinating. If Thistle became Pyre in Those Above, then Those Below takes Pyre on the journey into becoming something more – though wondering what the consequences will be.

There’s a delightful set of scheming and verbal knives from both our Aelurian aristocrat and the seneschal for one of Those Above. Watching those two spar is a delight, and the competent naiveté of the one, and the obfuscated brutality of the schemes from the other, are page-turningly compelling.
Both are charming – though the Aelurian more for the laser-like focus of an extensively talented and utterly amoral mind, the Roost-born for her efforts to close some of the gaps between humanity and Those Above, whilst remaining something of an everywoman. In each case, they proved rather hard to put down.

The plot – well, as ever, no spoilers. Still, it would be fair to say that this is a book which starts on the cusp of violence, with rebellion on the boil. There’s some heart-hammeringly good action here, mixed in with a soupcon of politics, and discussion of social structures. It builds on the momentum of the previous book, and gradually, inevitably, cascades a boulder mixed of madness and brilliance down the narrative mountainside.

Is it worth reading? You’d need to have read Those Above to really appreciate it, I think. But it’s a more than worthy sequel to that predecessor, one which promises a great deal, and viciously, nihilistically, cleverly, artfully delivers. So yes, give it a read.