As many of you have probably figured out by now, I'm a big fan of Bujold's work. Her science fiction, at least. The Vorkosigan Saga, an intergenerational family drama blended with adventure, politics, romance and, well, a lot more, is to my mind one of the seminal work sin the field. But somehow, I've mostly not cast an eye over her fantasy work.

Which, it turns out, is a shame, because it's a lot of fun!

Penric's Demon is the start of a series of novellae focused on the eponymous Penric. As the story begins, he's on his way to a wedding. Well, his wedding. One he doesn't seem overly enthused about, but which, as the dutiful younger son to a minor noble house, he feels obliged to go through with. Things take, well, lets call it a turn from there, and by the close, Penric's world has been changed forever. Possibly for the better!

The worldbuilding is, as you might expect from an author of Bujold's character, top notch. Given the form, she's clear and concise in her descriptions, getting you as much of a payload of "world" as possible in relatively few words. If there aren't any multi-page descriptions of food (sorry, GRRM fans!), there's context cluses and dialogue asides to keep us grounded in Penric's world, and enough description with tightly observed, precise details to make that world feel fleshed out and lived in. The story gives us enough context to play itself out; it wouls be churlish to want more. In a larger novel, I probably would, but here, what we have works wonderfully, building up enough of a framework of society, culture and environment that you can fill in the blanks yourself.

Interestingly, these Penric stories take plac ein the same world as some of Bujold's other fantasy work; I certainly didn't need to have read them to get a lot of enjoyment out of this story and its world, though I might go and try those other novels out at some point, for the extra flavour.

In terms of character, we see the same focus and precision given to Penric as we do to his world. In his actions, and in his internal dialogue, we find a young man in a rut, acting out of a sens eof family and duty, conscious of limited horizons, tolerating and chafing around their edges. He's a good lad, and an affable, likable protagonist. As things move along, he proves to have some hidden depths as well. I think the only flaw here is that the other characters, broadly, get less attention than I would like, and we don't see much of the motives of, for example, those antagonists whim Penric runs across. On the other hand, what we do have in this short space of narrative is very well done - Penric's family are, given a few traits on the page, people we can all identify with and have probably met in some form or other ourselves, and if the antagonists are mostly nasty pieces of work, still, they pull it off convincingly. There's certainly enough here to make you give a crap about the people on the page.

The story itself, well, I shan't spoil it, but it shifts along reasonably well. There's a certain amount of setup, as one might expect from the start of a series ("This is the protagonist.."). But once things get rolling, there's enough wit, banter, excitement, peril and chaos for anybody. This feels like a bite size read, in a good way; i found it hard to stop reading, and the short form encouraged me not to. I suppose my only real complaint is that though there's a complete story in here, I really wanted more. Which, well, fortunately there's another nine or ten of these stories, so that's not really a problem. This is a quick, entertaining tale that made me chuckle occasionally, and had some surprisingly effective emotional moments - it's a good time, a nifty adventure, and if you want a literary snack, this is definitely worth your time. 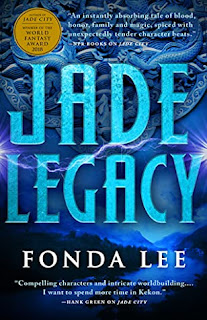 Jade Legacy is the final part of Fonda Lee’s Green Bone Saga. I had a great time with the first two parts of this series, which combines criminal enterprise, hands on politics, beautifully kinetic trans-natural martial arts, family drama, and discussions of identity, culture, and construction of the self. If that’s a bit of a mouthful, I’ve also described it as The Godfather meets Crouching Tiger, Hidden Dragon, though that does this series a disservice. It has deep roots, asking thoughtful questions whilst also not being afraid to show us raw humanity, and get the reader to feel things.

The tl;dr is that this is a great book. I didn’t want it to end. I found myself reading through the night, wanting to see what happens, but also not wanting to finish up. That’s always the mark of a great story. I suspect it’ll keep you all up late reading it as well!

This is a sublime family saga, filled with pain and joy in equal measure. Explosive, brutal, graceful violent action dovetails with raw emotional honesty, politics, crime and conspiracy. All ties to the lives and loves and hard choices and harder costs borne by a family we’ve followed for two books now. It’s a bloody, compelling, emotional story, and a fantastic finale to a cracking series.

Fittingly given the title, legacy is a core theme here. he country of Kekon is a minor power with a unique resource, surrounded by global superpowers engaged in a long, slow, cold war. How Kekon navigates the geopolitical reefs will be decided by its clans, groupings of families and tributaries who are the heart and soul of politics and finance in Kekon. The clans run retail, they run manufacturing, they run housing. They have economic arms which look after their people, which buy factories and movie studios, and more martial arms, with one eye toward arms and drugs, and the other protecting the assets of their clan, and looking to seize the territory of others. We know the No Peak clan best of all from this series, and their rivalry with their closest contender, the Mountain, the conflict in ways that these entities want their country to work, is a core part of this book. Because the families at  the top of these clans, they can’t stand each other. Theirs is a decades long history of blood and violence. But it’s also becoming something else - because if the clans can’t stand together to the outside world, they’ll be ground on the uncaring edges of superpowers that only see them as pawns in service of larger games.

We can see through the eyes of the higher echelons of No Peak as they attempt to navigate their personal feud, whilst preserving their country in the face of outside pressure. But also, they have to contend with a changing world, a world that is moving forward as it is in part because of their actions. A more connected world. A more tolerant one, perhaps. Or perhaps not. It’s a question, you see, of values.Hilo, the head of No Peak, is someone we’ve seen move from young, hotheaded killer to, well, something different. A leader who banks the fires of passion until needed, with a personable style, raw cunning and personal charisma - but Hilo is also aware that he’s shaping his country, and working out how that will work. And so are the rest of his family - mothers and sisters and sons, brothers, occasional cousins. Everyone has an agenda, and everyone is shaping the future.

Hilo and his family, at the head of one of the largest socio-political engines of their nation, have to decide what sort of future that’s going to be, and how willing they are to fight for it

Of course, it’s not all council meetings, quiet bribery and blackmail. There’s simmering revolution out in the streets. There’s Kekonese immigrants in other countries, whose communities are under threat (and this nuanced ,thoughtful exploration of cultural identity in different contexts is a joy incidentally, one with deep roots), and whose sense of self is a little more fluid, out from under the thumb of centuries of cultural shaping; being able to decide who they want to be, though of course under the strictures of another culture entirely.

And there’s questions of class, and the way that those who wear the jade, and are able to fight and kill with supernatural speed and pwoer, are also typically the power elite in Kekon. What does that mean for those that don’t, or can’t wear jade. What society do they live in? Is it the one we see between the cracks of the dream of the clans?

Which is all getting rather wooly. So let me put this out there, grounding, and an ending:

Jade Legacy is a brilliant book. It explores class and culture and identity through the personal lens of a family steeped in soci-opolitical power. But it also explores the personal stories of that family. Their loves and woes, triumphs and tragedies. The way they bounc eoff each other, and off those around them. It’s not all big questions. Some of it is intimate, emotional, parents working on marriages, children deciding who they’re going to become (and family trying to help them decide, with varying success!). There’s blood and sweat and tears here, but it’s laced right through with passion and friendship and love that comes off the pafe and seeps right through your fingers into the bone.

Go now, and read this book; it’s worth it.