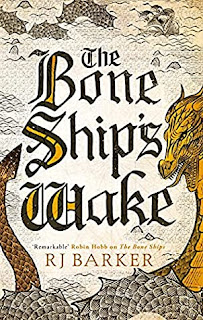 The Bone Ship’s Wake is the third and final part of R.J. Barker’s Tide Child trilogy. And, just to get this out of the way, it is very, very good. If you’ve read the previous two books in the series and are wondering whether or not you should pick this one up, the answer is a very strong yes. Pretty much put down this review, walk quickly to your nearest bookshop, and give them your money. Because you want to know how this series ends - and I can at least tell you that it ends with the same kind of wit, compassion, energy, imagination and raw humanity which made the first two books so bloody brilliant.A lot of that is the characters. Joron in particular, is a top-flight protagonist. In part that’s because of how he has a blend of strength and fragility which makes him feel very much a person. Now leading a fleet of ships, preying on the shipping of his enemies, and trying to rescue his captain, Joron could be seen as a legend in his own lifetime. Indeed, the text explores the formation of legends in this way - both Joron and his captain, Lucky Meas, can be shaped and driven by the expectations of their crews. Reputation, and the power of story, is looked at as something between a strength and a potential weakness, a set of constraints and freedoms given out by the tale that those around us tell themselves. But Joron lives inside his own legend, struggling to live up to it, and knowing he can use it to realise his goals. Fighting his own insecurities and depression, Joron also struggles with the more physical aspects of a progressive disease which makes him doubt his own sanity.Some of which may sound frightfully depressing, but if Joron struggles, he also fights, fights to find Meas, and fights to find himself, to define who he is, both as part of and against his own legend. That energy, that courage, the victories being as honestly earned as the sorrow in defeats, gives the story a set of emotional stakes and catharsis that means you care. Well, I do anyway. Joron is real, in his doubts and in working past them, in his illness, struggling with it and through it. And, of course, there’s heroics and moments of dazzling courage mixed in there, physical and otherwise.The world is, well, something special. A richly imagined tapestry of sea battles, dragons, piracy, politics, family, and the growth of legends. It’s obvious (to me, anyway) how much fun the author has working with the great ships, crafted from the bones of monsters. You can feel the wine-dark waves slapping against the bone hulls, the icy wind cutting through heavy coats, and the isolation, majesty and terror of the open sea. There are stern chases here, and a use of language which makes the world feel dependent on its seas, and those who sail them a society of their own. The rhythms of everyday life on a ship are wrapped around the core of the story, and the sea is the spine of the thing, the way people live in it, work with it, and let it become part of them. I will mention that there are, of course, some ship battles - they’re visceral, bloody, unflinching and real; including the grim tedium and tension of the longer chases, followed by moments of blood and fire. But even outside those times, the glowering skies, rolling waves and dangers of the deeps, make the story feel alive.I won’t spoil the story - at least any more than I already have. But I will say that this is a wonderful conclusion to one of the best fantasy series I’ve read in the last few years. It provides a tale that will keep you turning pages, and the kind of emotional payoff that will leave you thinking about the ending for days. This is a book that delivers a fantastic ending to a brilliant series, and if you’ve made it this far, you should absolutely, one hundred percent go and pick a copy up.
Posted by Chris at 8:04 AM No comments: 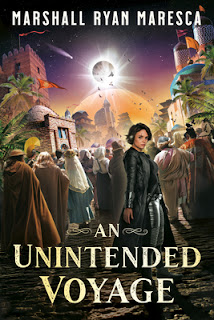 An Unintended Voyage is a new novel in Marshall Ryan Maresca’s Maradaine sequence, which, if I’m honest, is something I always look forward to! And, just to start here: this is a damn fine book. It’s smart, it’s funny, it’s human, it has real emotional stakes, a good heart, and you know what, it’ll make you turn the pages pretty quickly, too! It’s also a story that isn’t part of the many Maradaine subseries, but the start of something new  - so if you’ve been wanting to dip your toes into the water of this sprawling saga, this would be a great place to start.

At its heart, this is a fish out of water story (well, among other things). Corrie Welling is police. Willing and able to knock heads in order to serve the law, and, perhaps more importantly, to serve justice. She has a streak of duty a mile wide, a quick mind, and an ever so slightly quicker mouth, with a penchant for exotic insults. Corrie is young, and maybe a little idealistic, but her ideals are those that recognise the flaws in the world and want to make it a better one. She’s willing to stand up for her friends, and…well, anyone else she thinks isn’t getting a fair shake, actually. Corrie Welling is an engaging protagonist, one we can empathise and sympathise with, one with whom we can happily walk into the unknown.

Which is just as well, because Corrie Welling is having a very bad day. She’s been knocked on the head, and thrown into the belly of a ship travelling to who knows where, with a cargo of children, and nothing that suggests they’ll come to a good end.  Surprisingly, things can actually get worse from there. But Corrie has the resilience to weather it, and the mental and physical strength to refuse to back down from those looking to cause harm, and instead get right up in their faces. In a genre which can all too often Chosen Ones chasing their McGuffins, Corrie’s solid refusal to let Bad People do Bad Things is refreshing. She’s not here to save the world, but to find a place in it, to find something of herself. To learn and understand, and build communities. And, admittedly, occasionally to bust heads and yell at people. Corrie is a regular working woman, who just wants to go home already, and is very much tired of everyone else’s crap. That crap might involve deep magic, weird celestial events, indentured servitude, religious fanaticism, or (occasionally) coffee. But the weary attitude of an everywoman who is trying to make their way in the world and get things done is a tonic, an opportunity to see that heroines are made, not born. Corrie can change the world by doing the right thing, and she does that while standing square in a working class heritage of family, duty, service and friendship – and while doing that she shines.

Anyway. Yes. Corrie is a fantastic protagonist. She comes off the page at you with her energy, ferocity and kindness. And the places she goes, which, well, I shan’t spoil, have that life and crackle to them, that sense of depth and history that gives them context and reality. As Corrie wanders the strange and unknown, I was right beside her, as curious, as intrigued, as delighted and terrified as her. The Maradaine saga is known for its great worldbuilding, and if that’s your thing, you won’t be disappointed here.

The same is true of the story, which I really must not spoil. But it really did grab me and not let go. I picked the book up and didn’t put it down for hours, immersed in Corries’s world, in her story, and yes, I really couldn’t stop turning pages. This is compulsive reading right here, that you’ll pick up and not put down, and then lament when you’re finished that there isn’t any more. I, for one, am here for more adventures  like this, speaking to the dangers of fanaticism and selfishness , filled with the strength of community and friendship and trust, exploring what it means to be human with big questions behind a page turner of a tale.

So yes.  Anyway. This is a fun book, a great story, and one you should go and pick up right away – give it a try!