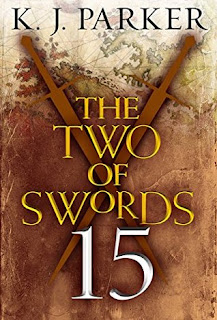 It’s time for another in our ongoing review series of K.J. Parker’s serial novel, Two of Swords. We’re up to part fifteen now. It follows on directly from part fourteen, which ended...explosively. An armed man had burst in on our previous protagonist. To the surprise of probably no-one at this point, that man is serving as our protagonist for this chapter – at least mostly, more on that later. There’s a bit of politicking in this segment, and some nice relationships  - including some spot on dialogue. The broader picture is at least partially affected, and the readers get to see more of it, which is great. It’s also a section where things get a bit bloody – I’m not sure anyone’s hands are clean by the close.

Our new protagonist is a Major in one or the other of the Imperial armies, and has turned up in order to make off with the slightly mysterious woman we caught up with in the last section. Parker manages to draw us his character quickly, and then fill in the detail – a wry, tired man, trying to do what he sees as a hard but necessary job under difficult circumstances. That the job involves mangonels and kidnapping is neither here nor there. It’s an attitude you see in a lot of Parker’s characters – people doing the best job they can, even when the job is an awful one, their efforts to halt the widening spread of chaos met with quite the reverse. Still, there’s layers to the Major. We’re examining the gap between perception and reality, between the three kinds of truth, again. He’s a man happy to claim he’d burn a library, or organise a massacre to get what he needs – and says afterwards, feels afterward, that he wouldn’t have done so. Whether he actually would is another matter, and that ambiguity of character is a real high point of this part of the text.

Another is the Major’s relationship with one of his subordinates, and with their newly acquired cargo. The latter is embodied in tense, spiked dialogue. Each dances around the other, and there’s a sense that at least one of them is looking to draw blood – emotional, if not physical.  The contrast with the Major’s relationship to his subordinate Captain is clear. There’s a less formal respectful dynamic there, a sense of two people who’ve worked together for a long time. If not banter, then there’s a sort of sly acknowledgment of who and where they are, and the absurdity of their position. Parker manages to spin this friendship out of passing remarks and stray thoughts, and lets the reader fill in the rest – but it works.

Geographically, we spend rather a lot of time on the sea. There’s a fair amount of boating, general seasickness, and so on. But there’s also tours to Blemya – allowing the reader to catch up on events there since the queen’s last appearance – and other areas, more mired in the ongoing conflict. As usual, Parker pulls out some rich, imaginative prose that really makes these locations come alive – the creaking claustrophobia of shipboard, the elaborate grandeur of the Blemyan Great Hall, the quiet brooding of the moorlands. It’s a world that’s close enough o our own to be familiar in a lot of ways, and the narrative makes it come alive.

For the plot – well, as ever, no spoilers. But there’s rather a lot of blood in this one. And we finally get a view of the purported goals of the Lodge in the war. Or at least some of them. Of course, Two of Swords has been full of misdirection and conflicting agenda’s so far, so it’s possible they aren’t the whole truth. But still, it’s nice to get a sense of the wider picture. The smaller story, of the Major’s journey with his captive and his men, is pleasantly, intimately told, and a thoroughly enjoyable read; though the sense that we’re entering the endgame hovers over the narrative, a brooding stormcloud of promise.


At this stage, I suspect you know if you’re invested enough in the series to keep reading it. I will say that this is one of the quieter instalments (bloody parts aside), but one which looks like it could have a strong impact on the larger story as the narrative ramps up – and that made it well worth reading.
Posted by Chris at 12:31 AM