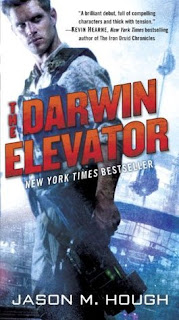 The Darwin Elevator is the first in the Dire Earth Cycle by Jason M. Hough.  It’s set fifty years or so after a cataclysmic global event. A plague of some kind turns people into shells of their former selves – filled with rage, and determined to tear apart everything around them. The only sanctuary is in Darwin, Australia. As the plague struck, a small area around Darwin remained mysteriously unaffected, and was used as a last ditch refuge. A space elevator was built there, to push the shattered remnants of humanity into orbit, and away from the insanity and death that waits outside of Darwin’s borders.

The world, after the cataclysm, is an eerie place. Much of our time is spent with the leader of a scavenger crew. They hurtle across the globe, touching down in sites of technological or cultural importance, picking up relics for well-paying clients. This ghoulish archaeology has an undertone of sadness and loss, and a slightly louder tone of insidious terror – coming round each corner , one might find a valuable artefact from a forgotten world – or a mindless ravening monstrosity, looking to rend flesh from bone. Hough manages to blend these two moods perfectly – and the melancholia and fear of the scavenger crew pours off the page. Along, it has to be said, with rather  a lot of bullets. More on that later.

Aside from the broken world, there’s also the surviving city of Darwin. It’s a place constantly teetering on the edge of chaos, keeping the mad hordes away, whilst pushing food up the space elevator to the orbital banks in exchange for tech and materiel. The desperation here is palpable, and the despotically iron control exercised by the city manager, in part for his own aggrandisement, and in part just to keep the society from falling into chaos, is captured well. Darwin isn’t really a place you’d want to spend time if you could help it – but it is vital, alive, and a nice thematic contrast to the broken world outside.

In contrast to both is the society up the elevator – the isolated, technological bubble, looking to keep humanity alive, sustain them, and perhaps find a cure for the plague that ended humanity. This is a cooler, more clinical world, one of separation and strict hierarchy, ruled by a council of oligarchs. There’s an arrogance on display, and a feeling, perhaps unearned, of power. Hough manages to keep this third society, those in a bubble, distinct from the brawling, teetering city below, and the hungry, dead land outside.

Within this world, we’re following the immune, Skyler Luiken, and his gang of scavengers. Skyler is a champion of self-doubt, a man leading his crew because no-one else will. He’s driven to succeed, but mostly to put bread on the table. The world outside is a source of funds, and it seems like he’d rather not be out there at all. Over the course of the text, Skyler becomes more confident, and gains a certain amount of personal strength and surety – the flow feels organic, his doubts falling away as events require him to combat them alongside more corporeal foes. Still, though we spend a lot of time with him, it feels like there needs to be more – there’s a lot of plot going on, and we learn a lot of Skyler from what he does, but a few more nuanced, reflective moments wouldn’t hurt. Still, he’s a believable protagonist, flawed as he is, and helps keep the narrative grounded.

The supporting cast of his crew are perhaps less well rounded. I’d have liked to have seen more of them.  They have traits, granted, and we can see them act upon them, and make their own choices – but they feel like foils for Skyler, rather than independent individuals.

There’s also a fair bit of time spent with the manager of Darwin – here we see a man gradually succumbing to the sickness of power. He’s not a good man, by any stretch . A believer in strength and cunning deciding what is right, he’s a man forming an army, and trying to keep a city full of people alive. Some of it is more widely helpful, but most of his actions have selfishness at their core, a desire to come out on top in this smaller, meaner world. As a villain, he’s occasionally conflicted, even more occasionally sympathetic, and typically quite worryingly repulsive. The sort of visceral reaction he evokes is a sign of the good work Hough has done in crafting an antagonist – of sorts, at least, if the environment weren’t enough.

The plot…well, it starts out looking at the retrieval of old technology. There’s a central mystery too, which is worked on throughout. But to avoid spoilers, all I’ll say is that this is an action packed book. It has an absolutely rip-roaring plot, which never really lets up, and some really well done action sequences. It feels non-stop, each turn of the page bringing another revelation, another reaction, another explosion. It grabs hard, using the setting to leverage into serious action, and doesn’t let go.

Is it worth reading? Well, I love the setting, I really do. I’d like to see the characters given more space to grow into themselves, but perhaps that will happen in later books. The whole is a fast-paced piece of enjoyable sci-fi action, and if that’s what you’re in the mood for, I’d recommend it.