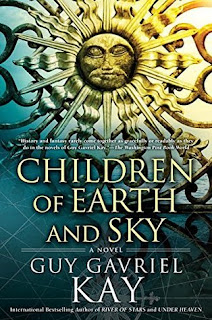 Children of Earth and Sky is a new fantastical history novel from Guy Gavriel Kay.  It’s set in the same universe as a lot of his other work, one which is familiar, carries a lot of similar events and personalities, with different names, blended together with a soupcon of the supernatural

As ever with Kay, the characters are absolutely spot on. There’s a diverse, sprawling cast from Ambassadors to urban raiders, Emperors to the sons of merchants. Each of them, however, feels special. Kay is a master of making his characters feel complex, with a rare level of emotional depth and personality which brings them off of the page as living, breathing individuals.  The woman who works so hard to become a raider, and lets bonds of loyalty and vengeance move her  is as vital and intriguing as the artist, looking to define himself alongside the legacy of his father, sent into perilous circumstances. That each character comes off the page feeling distinct and human is a tribute to Kay’s lyrical, carefully constructed prose.  That each character is intricately linked to each of the others, through each other or through the waves of circumstance, only makes the overall picture more impressive.  Occasionally it feels like the cast is sprawling a little widely, but they’re typically reined in where necessary – and  each has a level of nuance in their character that Kay has always been so good at portraying.  Honestly, plot aside, I’d read the book for the characters alone – absorbing, believable, flawed but ultimately, well, people.

The world they live in is analogous to near-Mediterranean Europe in the fifteenth century. Sarantium, light of the western world, has fallen to forces from the East. Cultural and political shockwaves are still surging through the surrounding nations, the new status quo threatening to shift delicate balances one way or the other. We get to spend some time in several other large cities before going anywhere near Sarantium; upstart trade republics, raiding cargoes to keep themselves fed, and towering commercial colossi – one a rough parallel to Venice. There’s also space to wander the backroads of the continent, near to forests gradually being felled, and Kay makes each environment feel unique.

The cityscapes in particular are vivid examples of urban geography, from the gentle bridges of the alternate Venice, to the broken walls and shattered hippodrome of the renamed Sarantium. The space outside of the cities feels more isolated, perhaps a little magical, but equally terrifying and occasionally lethal.  In any event, Lay has conjured a gloriously living world here, one which pours itself off the page and into the imagination of the reader.

The plot – well, as seems traditional, it begins in several disparate strands. People making small choices, being directed (or not!), and setting out to live their lives. Perhaps more than usual, it could be difficult to keep a grip on all the various narrative threads – moving from character to character a little disorienting. But Kay’s careful pacing pays off, as each of the strands ties in to the others, a set of small actors changing the world in the ripples from their own actions – if only changing it for themselves. There’s lost love here, and murder, and individuals looking to define themselves. There’s the question of legacy, and the way individuals relate to their parents. There’s gentle dialogue on the matter of faith, and representations of the same. There’s epic politics occurring in the background of our protagonists lives, and there’s the small (and otherwise) human dramas which make those characters who they are by the end.

Is it worth reading? Unreservedly yes. If you’ve read some of Kay’s other work, there’s some delightful references scattered through the text, but if not, the book will work perfectly well. It’s an intriguing, complicated blend of pitch-perfect characters doing the best they can, in a well-realised parallel history, and occasionally changing the world. I couldn’t put it down, and in that spirit, I highly recommend that you pick it up.