Beyond The Aquila Rift - Alastair Reynolds 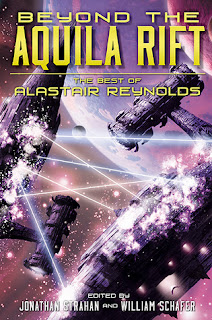 Beyond The Aquila Rift is a collection of short stories from acclaimed sci-fi author Alastair Reynolds. I’ve seen a couple of these stories in collections before, but there’s quite a few which have not been previously collected (and I’ll put a table of contents at the end, in case that helps).

So, let’s talk about the worlds on display here.  Constructing a universe on a grand scale has always been a strength for Reynolds, and the imaginative talent on display here is, if I’m honest, pretty dazzling. There’s explorations of humanity that touch on the cultural, as with the titular story. There’s breath-taking temporal leaps, and feats of stellar engineering so vast as to shatter both expectation and the narrative lens. The broader sweep, across the stories, is of a confident, imaginative writer, bringing the reader into a complex and un-documented playground. That some of the toys may well be lethal is rather beside the point. In amongst his evocations of the wonderful and the terrible, which is done with characteristic élan, Reynolds brings the reader into more intimate focus. The shattered grandeur of Martian terraformers from The Old Man and the Martian Sea is contrasted with the gently poignant relationship between that man and a young woman briefly in his care.

In the same vein, the travails of another young woman, in a Newcastle once more locked into an ice-age, are thrown into definition by the thronging, recuperating world around her, as well as intimations of a wider threat.  Reynolds has always been able to give us a sweeping vista, as vast as the reader can conceive; these stories combine that  with a sense of the familiar, a sense of the human, even when mixed with the infinitely more unknowable, which creates a bond with the reader and makes  each story relatable, whilst enhancing the strangeness laced throughout the prose.
There’s great range in place here – from enigmatic, claustrophobic puzzle boxes, to a world broken by nuclear fire, to our very near future. Each seems to leap fully-formed from the page, a well-realised idea, stretching the bounds of the imagination. In summary, the world building is top notch.

The characters. Well, I’ve spoken well of Reynolds more recent characters, having occasionally felt their predecessors received less attention than the worlds which they inhabited. On some cases, it stills feels like this is the case – the characters driving a plot within a world, but not quite forming part of it themselves. On the other hand, this may well be intentional in some stories, and is entirely absent in others. Minla’s Flowers, for example, is a long, slow study of the way in which two individuals change, and what they are willing to do in pursuit of a goal. That shift, that fluidity and rigidity of character, is constructed with horological precision – and it’s both effective and affecting.

The Water Thief is another example – looking at the way character can be hammered into or out of someone by circumstance. Here the question is not around actions, but decisions – when an individual will decide to take a stand. It has a nuanced portrayal of its protagonist, a man on the edge of hope and despair, holding to a notion of himself.  There’s other questions of course – the story Fury takes us down the rabbit hole of memory, as does the languid, mildly horrifying Zima Blue. In exploring what makes a sentient a person (and perhaps vice versa), Reynolds does well. As always, I wanted to spend more time with the characters, to know them better, but there was enough meat on their bones to make the characters, as a whole, effective and believable individuals.

The plots…well. As ever, no spoilers. But they range from melancholy discussions of the human condition, to tense investigations, to the kind of creeping horror which makes the reader shudder, but turn the next page. There’s deliberation in these pages, ruminations, decisions, and the stakes are high enough, both personally and absolutely, to keep the book in hand.  Some rocket along, and some are less frenzied, more considered – but I can’t say the plot of any of them was a disappointment.


Is it worth reading? If you’re new to Reynolds, the breadth of talent on display here demands your attention. He has a penchant for the grand and high concept, dovetailed with the personal throughout this collection. If you’re coming to this for your next Reynolds fix, then be assured – it’s as weird, and clever, and awe inspiring as his best work.  Definitely give it a try.