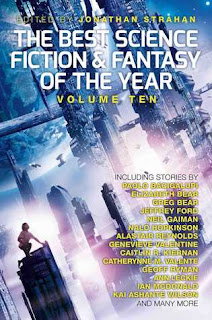 This is the tenth (yes, tenth!) annual anthology of science fiction and fantasy edited by Jonathan Strahan. I talked about last year’s collection in fairly glowing terms, so this one arrived with some expectations in place. Happily enough, it met – and in the case of some stories, may have surpassed – them.

As with last year, this is a diverse collection of material. It opens strongly with a new piece set in Neil Gaiman’s “American Gods” world, a blend of modernity and the mystic, the protagonist a liminal figure. The dialogue is familiar, yet quirky, acidly, vulnerably human, the characters mouthing them likewise. Well, perhaps not always human. But this can be contrasted with the fabulously alien “Little Sisters”, Vonda McIntyre’s exploration of a thoroughly alien psychology and physiology. There’s enough there to empathise with, but the core factor is the strangeness, the newly odd becoming familiar. The characters operate in a cultural paradigm entirely different from our own – and that shift is one which makes for an enjoyable read.

Then there’s the quieter fantasy of Robson’s “Water of Versailles”, drawing us back in time, lacing the slowly decaying wonder of the Bourbon courts with something a little more magical. It’s a quieter, more reflective piece on humanity, the things we do for advancement, and the decisions we make around what we find important. It sits in contrast to the tone of silence settled over Valente’s “The Lily and the Horn”, which presents a highly personal and highly lethal social engagement, whilst exploring the personal relationships sitting behind it. The subtext, as always with Valente, is entwined through the setting, through the dialogue, through the characters themselves – all making something living, breathing and complex.

It’s the same throughout the rest of the collection. There’s something for everyone here, from Alastair Reynolds thoroughly eerie ‘Murmuration’ to Ann Leckie’s “Another Word for World”, a fabulous treatise on shared goals and the role of language. Of course it exists alongside a political backdrop and an assassination attempt. There’s a mixture of tone throughout -  from the oppressive strangeness of “The Game of Smash and Recovery” to the sparklingly dark humour and raw truth behind “The Deepwater Bride”. Some of the pieces worked better than others, I thought, but as a whole, the collection has an unimpeachably strong level of quality. It delivers a startling range of science fiction and fantasy, and the stories  themselves have a great many interesting things to say – and sprawling variety of ways to say them.


On that basis, is this a collection worth reading? Yes, absolutely. There’s fast-paced action in here, enough to keep you turning pages. There’s fully formed characters, human and utterly otherwise. There’s vivid, elegantly crafted worlds, from the familiar to the thoroughly alien. Importantly, it’s also a collection of ideas, an anthology of thought, of exploration – looking at who we are, how we got here, and where we’re going. On that basis, though it does try to be all things to all people, I’d say that on the whole, it succeeds, and does so rather well. SO if you’re looking for an anthology of exciting fiction, from old favourites and different voices, then you could do a lot worse than to spend your time on this. Give it a go.
Posted by Chris at 12:52 AM