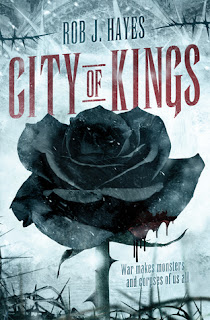 City of Kings is a fantasy novel set in Rob Hayes’ ‘First Earth’ sequence. It shares the setting with several duologies, and may be read as a sequel to one of those. However, City of Kings sets out to be a standalone novel, and it mostly succeeds. I found having the extra context from some of the other books in the sequence was useful, and added a bit of narrative flavour, but the story rumbles along perfectly well  without any further knowledge.

This is a book about sieges, personal and, well, slightly more physical. The latter is clear enough. Crucible is a city of kings. Well, nobles. They’re a shifty lot, with not much to recommend them, other than a sense of implied privilege, and rather a lot of armaments. Crucible is under siege from an army led by our protagonists. It sits in the Wilds, an area apparently mostly lawless and akward, where the nobility has been thoroughly impressed with the notion of private law. They are, in sum, not used to getting their own way, and the countryside has risen up against them, arranged to brutally murder their friends, and now sits outside their door. The city of the title is a fortress. Murder holes. Walls for miles. Traps. Arrows everywhere. It’s not the sort fo place you want to storm. Hayes’ description is sparse but precise; it shapes the idea of a walled, impregnable city in the mind of the reader, and leaves you to fill in the rest.

The author does shape a believable world; the towering walls of Crucible feel as blank and imposing as they might ti any infantry on the wrong side, and the larger social system, where the ‘Blooded; sit over the top of the citizenry and soldiers is, of course, fairly familiar. Indeed, the revolt the reader is asked to step into, led by the Black Thorn (see below) has echoes of the peasant’s revolt about it. As the city falls under siege, it also aches with burn scars, with catapults, with assassination squads sent under the cover of darkness, with explosions, with the sense of necessity. This is a word which is nasty, brutish and short, but also has the hum and crackle of a space which is absolutely alive.

The Black Thorn is our clearest entry point into this space; he’s a thief, a murderer, an unashamed killer. He’s also a man in love, and a man who has made, and recognises, mistakes. Stolid, thoughtful, and increasingly aware of his own mortality, the Black Thorn is someone continually attempting to divest themselves of their own reputation. Still, he has a dry, cynical, world-weary delivery which matches the continual barrage of the story, and makes you wake up and care. The Thorn also has his own connections – relationships and old friendships, rendering his actions fraught with interpersonal complexity and peril. You may be asking, is the Thorn convincing, compelling enough to keep you turning pages.  Yes, I think so. He’s an archetype to be sure, a villain turned hero, exhausted by his own existence – but convincing enough, and the humanity is there in every page, the emotional depth and resonance keeping you looking forward.

There’s a diverse cast of course, from the ruthless outlaw queen-in-waiting, whose motives may not be as dark as they seem, to the struggling, fighting, dying squaddies desperate to get into the city, or at least not to be shot full of arrows. The villains of the piece are certainly the Blooded, the enemy, sat on their walls, throwing insults from an insulated position where privilege protects from consequence. They’re an awkward lot, and repulsively entertaining to read; that dealing with them requires moral compromise seems obvious, but also causing issues for those on the ground.

And what ground it is. This is the war story you’re looking for. Ladders on walls. Boiling oil. Sappers. Trolls. There’s blood absolutely everywhere. In a sense this is more a character piece, about how people deal with stress, anxiety, the potential and reality of disaster. It’s also a war story, and a comedy, and, as the drama rachets up, a heist in the making. There’s a lot going on between the flights of arrows and the swing of swords – and you should definitely be paying attention.

I’d recommend this book as a stand-alone; having the context of other books in the same world adds something, but even without those, it’s a page-turning adventure.
Posted by Chris at 12:00 AM