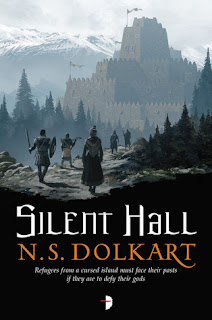 The short review of Silent Hall, the debut fantasy novel from N.S. Dolkart, is that it has a lot going for it.  It’s ambitious, imaginative and innovative. There’s some rough around the edges structure and some of the characterisation felt a bit abrupt, but overall, it’s a clever, interesting story, and a great start to a series.

The world – well, it’s a world of divinities. The liminal space between the divine and the human is very thin. They’re real, and able to act in the world. They also have a tendency to hold grudges, and play favourites. Nations, and people, attract the patronage or wrath of their gods. Their presence is a core feature of the world, and that reality is woven skilfully through the text – from casual imprecations, to desires not to attract divine attention, to soaring acts of grand majesty and smaller, more intimate violence. There’s a tapestry of human history here as well, though that tends to be uncovered by allusion. It’s a world that has known great empires, now dispersed. Where the gods themselves once made war. A lot of the lore gets thrown at the characters, and some of it sticks – to both them and us. It can be a lot to take in, but by the end of the story, it does feel like a living, breathing world.

On a more immediate level, we see a lot of the world from the ground up, as the characters we’re following tramp around it. From wizard towers to terrifying woods we go, or through the tumult of an island on the verge of its annual celebration of the sea. Each locale has its charms, and if they do feel slightly too well delineated (‘the forest place, the city place, the cave place’…), they’re well described, and the details brings each location wonderfully to life. Sure, the cave place is a bit…cavey, but those caves are deep, dark, and chill-inducing. Dolkhart excels at differentiating his locales, and giving them enough information to let us draw the detail in for ourselves. The world, in sum, feels real.

The world is a stage though, for the characters. Here we get a proper ensemble, all young people, all separated from their families, entering a new world together, mostly by happenstance. And they all work. Different as they are, they all feel like people. Argumentative, yes. Emotionally fragile, for sure. Bloody minded? Absolutely. But that’s what makes them believable. They all fulfil different roles in the group, but have a dynamic of slowly dawning trust which makes for compelling reading.
They’re a nice bunch, and you have to appreciate a group that, when it interacts with a problem, doesn’t immediately attempt to stab it. There’s room here for thinkers, for people who don’t want to fight, because it turns out that fighting gets people killed. On the other hand, there’s also some absolutely top-notch fight scenes, filled with an energy which made flipping pages to find out what happened next an absolute joy.

The plot? Well, I won’t spoil it, but there’s a lot of hunting for various macguffins. Which isn’t a bad thing. It lets us into the world. It lets us see how the characters react, to that world, to each other, and to the increasingly large bushel of questions that they carry around with them.  I’ll say this though – as a journey novel, this one works. You want the characters to reach their destination, sure, but the journey itself carries the heart of the story. It’s good stuff.

That’s really what Silent Hall is. It’s well-crafted fantasy, which takes some familiar elements and puts a new spin on them, then blends that with an original world and some cracking characterisation, and lets rip. It’s a good start to a new series, and I, for one, will be looking to see where it goes next.