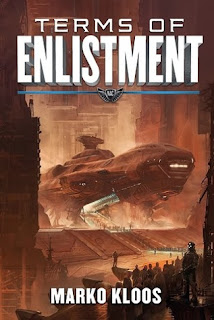 I came late to Marko Kloos’ ‘Frontlines’ military sci-fi series. I have to admit, I picked up the first book on a whim, because it was on sale, and I’m a sucker for the sub-genre, when done well. With that in mind, I didn’t have much in the way of expectations when I started, but it turns out this is actually a really well done military sci-fi novel!

Andrew Grayson is our viewpoint character, living on the margins in an earth already crammed to bursting. His subsistence existence in a tower block, where one doesn’t dare go out of doors without a firearm, evoked the earlier works of Pournelle. This is a young man uncertain of what he wants to do in life, constrained by a system with low expectations, which also helps to maintain those expectations. Those in the towers, living on pablum and broken hoe, aren’t expected to do better. I’ll give Kloos this: the dreary welfare towers he builds sound like awful places, rest-homes for the terminally unwilling and the criminally able. I’m not sure they work in the entirety as presented – the welfare recipients not having the same complexity as Andrew, who lives among them – but they give off an emotional mood that it’s hard to deny. Two parts hopelessness, which the reader can pic up alongside Andrew, living a meaningless drudgery of an existence, and one part burning rage, as tower-dwellers remember that they’re people, and react against government efforts to remove them.
As an aside, points to the writer for managing to make both sides of this struggle sympathetic. The internal military sent in to control riots are dedicated, thoughtful and conflicted in their mission, to prevent the rioters of a city from overflowing into the wider wold, but the rioters they’re indlicted on aren’t presented as any less than  humanity pushed to the edge, and looking for a  handle on control, even if that control is split amongst a roaring mob.

Anyway, Grayson. He’s an odd duck. Shown as the recipient of government largess, he’s easily wry, with a bite that made me chuckle, albeit one that doesn’t quite fit his background. He sounds cynical and smart, and that makes him readable in a world where genuine effacing of the self to authority is a given, but doesn’t necessarily make him likable. The kid makes a lot of bad decisions. On the other hand, he’s a kid. Smart, capable, driven, and the emotional heft of his poor background and efforts to escape it are convincing.

It helps that the military the author gives us is equally convincing. I won’t bore with armour ratings and ammo calibre, but suffice to say that its all well researched and, as far as it can be, spot on. Dropship pilots, infantry, its all there, the logistics given the incidental room between the larger background and the character pieces. They glow. You can feel the research poured into every line, even as a dropship powers off of an interstellar carrier to inconvenience some poor fool with high velocity munitions. This is a world which cares, which seeks authenticity. It has a military which has leapt in amongst the stars, but doesn’t quite know what to do with it yet. That said, its immersive and convincing. Lacking a military background, I still breathed this in and felt convinced that it could be real. There’s the same levels of ferocious affection and abysmal non-performance as in our actual government branches – extending this to the space-navy was no hardship.

In this world, where marine detachments suppress earthbound riots and soar between the stars, Kloos combines a detailed, convincing military and galactically political backdrop with a heartfelt personal story – as Andrew attempts to get his crap together between bouts of serious gunfire. There’s some brilliant, well-crafted moments of action, where my heart was in my mouth turning the pages wondering what would happen next, and some where I was reading about the government(s) of Earth and how they deal with threats – and both the immediate and the longer range worked well, and kept me on the page.

Is this for you? Well, if you’re looking for a new military sci-fi series, yes. Certain elements will be familiar – the young recruit, moving through the ranks – but well executed. Others will be fresh (much of the world) or prepared to subvert expectations. If mil-sci-fi is new to you, it’s a great story anyway, but if you’re a fan of the genre in search of a new entry, this one is definitely for you.