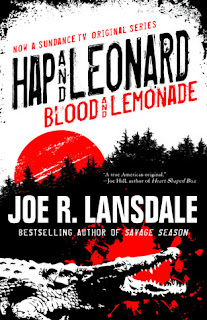 Hap and Leonard: Blood and Lemonade is the latest in Joe R. Lansdale’s long running “Hap and Leonard” series. It’s a mosaic novel – a collection of short stories, with a framing story wrapped around them to provide context.

This is Hap and Leonard, the early years. The Texas here is owes far more to the forties and fifties than the sixties. Racial and gender discrimination are in rude health, and those with power and privilege are as anxious to preserve them as ever. The framing device – a day of Hap and Leonard training, driving around, chewing the fat and telling tales, has a gentleness to it, a relative security which comes backed by their history together. The prose lets you feel that comfort, though – the warmth between the two leads is undeniable, if somewhat prickly; sort of like two porcupines mating.

In any event – the world Lansdale shows us is one we may not be proud of. The casual racism, segregation, homophobia and sexism rise off the page like sewer stench. It’s unpleasant, but vividly realised stuff. This just (or indeed mainly) a book about social issues, however, even if they do permeate the world. It’s also one exploring the lifestyle of East Texas in that period – from the bare-knuckle fights under the blazing shadows of a tire fire, to school shootings after high school abuse. In some cases, the social issues are the core – in one story there are consequences when a couple of (white) veterans stand up for a (black) fellow veteran in the face of bigotry. This is a place where there’s enough space to spread your arms and run free – but also one where everyone is constrained by society, and where conformity to expected social norms is backed with the potential for violence.

Into this rather regimented space step Hap and Leonard – younger, yes, but no less prone to smarting off. They’re still working up to the comfort level of their later relationship, but the banter is still sharp and on point. There’s a wry humour worked through the dialogue between the two – all casual insults and slight edges are here, building the quality we see later in their personal timeline. The dialogue is pitch perfect too – well paced, sometimes charming, often belly-laugh funny. But much like the world that Hap and Leonard inhabit, there’s darkness shifting around in here, razor-edge smiles mixed with a savage poignancy.

If Hap and Leonard are the antibodies to their environment, there’s more than enough other characters sharing the stage with rather fewer scruples. Small town boys with racial epithets to hand, and full blown bayou drug smugglers are perhaps the least of it. Each has the small, sordid ordinariness that defines their villainy and makes it real. They help make the small Texas towns feel alive, reluctantly dragging their feet into the future we inhabit.

The stories themselves are great fun, a mixture of quiet moments of humanity, thoughts on the world and Hap and Leonard’s place in it – and outbursts of violence. The blood and Lemonade of the title is here in the stories – the best and worst of people’s lives thrown open for our enjoyment. It’s stellar stuff – and makes for a compulsive read. I read it before looking at the Hap and Leonard novels, with passing familiarity of a few short stories; coming back to it after getting some context gave the collection some extra depth, but wasn’t required to enjoy the stories for what they were – tales of family, brotherhood, death and happiness, humanity our common factor with the past. So yes, this is a great collection – thoughtful, rather clever, and with enough bullets and banter to satisfy the most demanding reader. Give it a try.