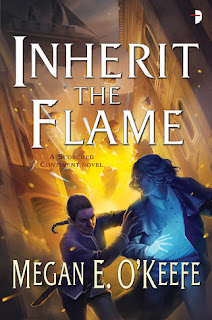 Inherit the Flame is the third and final volume in Megan O’Keefe’s ‘Scorched Continent’ trilogy.

The first two books were a buccaneering adventure, with airships, magic banter, and even some personal growth. They were a lot of fun to read, so I came into this conclusive part of the trilogy hoping that it was going to pay off.

The centre of the text is Hond Steading, the home of the charming and at least modestly tormented Detan, one of the main cast of previous books. The Steading, built into the side of a dormant volcano, is the centre of power for the continent, now trapped in politics and geography between a resurgent Empire, and their rebellious commodore, a woman with an iron will, and an agenda of conquest. The Steading is a thriving place, and seems, in comparison to the frontier settlements and prisons we’ve seen previously, positively metropolitan. The populace are opinionated, and have an interest in the arts. There’s public meetings in a new civic forum, where anyone can speak should they desire. But there’s a sense of fragility here as well – the Steading is a soap bubble, waiting for one of those that covet it to risk the wrath of the other, and that time I fast approaching.

Still, there’s an elaborate palace, where Detan’s family has ruled for generations, and the population has a dynamism and an energy not seen to such effect elsewhere. There’s hints of the broader picture as well; the Empire is in an abruptly expansionist phase, and if nobody is entirely certain why, the hints of what is moving that larger body politic into warfare maintains the pressure which helps drive the narrative forward. In amongst all the politics and occasional stabbing, there’s also time to look at the sensitivity to the ‘sel’ substance which produces the magical effects that we’ve seen in the world – from thundering explosions to shapeshifting. Sel is something of a mystery, to both the world of the text and the reader, but it’s one whose depths will be plumbed here.

Most of the characters are fairly familiar from their previous outings. It was lovely to see Ripka, once head of law enforcement in another city, try to get used to being a civilian again. Then there’s Detan himself, whose efforts to avoid causing calamity have moved past fear into acceptance. His desperate and often despairing attempts to gain control of himself before he destroys anyone he loves are fraught and poignant. That they’re often masked by banter which can often raise a chuckle is a benefit – even as it reveals a character papering over their own mental cracks.
We do get a little more understanding of previous antagonists here as well. There’s the Commodore, sometimes known as Throatslitter, a woman who has spent the last two books as a force of nature, capturing cities and towns for a design of her own devising. But she has her own pains and motives, and in discovering what they are, there’s the chance to grow some sympathy, as she moves into a more morally grey area. But there’s other villains here, cold-eyed pragmatists and terrible zealots – and all of them make the blood run cold.

The plot – well, it hits a few different beats, often rather well. There’s the suspenseful  journey that Ripka makes as she attempts to pin down and eliminate whatever scheme the Commodore is plotting to take over Hond Steading. There’s Detan’s struggles with his power, the responsibility which comes with it, and the need to put himself in the thrall of his enemies to learn control. But there’s also the overarching narrative of conflict and control, as the Steading tries to remain whole in the face of two irresistible forces. There’s some great chases, explosive, horrifyingly grand uses of magic and cracking dialogue too.

Is it worth reading? If you’re new to the Scorched, I’d say go back to the first book in the series and give it a go. If you’re already a fan though, this is a worthy conclusion to the series, though ti may leave you wanting more.
Posted by Chris at 11:30 PM