The Song of the Dead - Carrie Patel 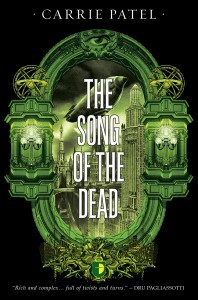 The Song of the Dead is the third and final novel in Carrie Patel’s ‘Recoletta’ sequence. The first two have been great explorations of an enclosed society and its surroundings. Murders have been investigated and governments overthrown. In a series which has also looked to explore choices and, more particularly, their consequences, the conclusion was always going to have a lot of potential promise to fulfil. Happily, it manages to do so.

This time around, although we do get some time in the city of Recoletta, it’s not the only focus. Still, it’s great to go back to the underground city again. This is a claustrophobic space, one where history has been captured and maintained by the government, and where stasis has been an effective way of life for generations. Broken apart by successive coups, Recoletta is now on a knife edge between savagery and civility. The old order has been cast aside, but nobody is quite sure what will replace it.

But if we saw Recoletta in the first volume of the series, and the immediate environs in its sequel – well, this is the book that takes the characters (and the reader) into the wider world. There’s several new social constructions here – a cosmopolitan, close knit nation of travellers, their eyes turned inward is one, its acceptance of the wider world a stark contrast to the Recolettan paranoia, its lack of integration with other social groups depressingly familiar. Across the sea though, lurks something very different; here is a vast civilisation, one with a high degree of technical prowess, and a relatively open society. But it’s also a society defined with a fear of the Other, replacing the enforced isolation of Recoletta with something more ideological. Both of are internally consistent, sharply, vividly drawn social spaces – a pleasure, of sorts, to explore.

The characters – well, there’s some familiar faces returning. Liesl Malone returns, and she still has her dour, pragmatic charm.  She’s still an investigator at heart, a woman comfortable on the streets, in action, and with a blunt personal honesty which can pass as charisma in the right light.  If she’s changing, it’s in becoming more aware of the larger consequences of her actions, in a stronger will, and in a growing distaste for authority – in both assuming it and being controlled by it.  This latter trait she shares with Jane, once a laundress, and now a survivor of the turmoil of Recoletta’s recent months. Jane is quick, persuasive, and perfectly willing to lie through her teeth in order to achieve her goals. Where Malone works within the frameworks of society, driven to fix the problems she discovers, Jane is determined to change that society, or, at least, to escape from it. She’s a fiery counterpart to Malone’s stolid focus – and when they’re both on the page at once, it’s an absolute delight. The bickering, the low level distrust, the simmering dislike – all comes together to make an unlikely duo, whose exploits are both fantastic and ring true.

Though these two are the focus of the text, there’s a swathe of supporting characters here. Some are familiar from the previous books, others are new. The villains are sympathetic, their motivations somewhere between grey and genuinely good. If the reader finds their methods monstrous, it can be difficult to argue with the problems they identify, and the issues they’re struggling against. It’s nice to see this sort of ambiguity, our heroes not avatars, our villains not slavering fools – both instead sitting in the broad spectrum. This makes distinguishing “villains” rather difficult, which I think is something of a benefit. In any case, the antagonists our protagonists run across are certainly complex, convincing characters.

The plot – as ever, no spoilers. But it’s got something for everyone. There’s the great secret of the Catastrophe, which shattered the land above Recoletta. There’s air battles, train robberies, betrayals. A whiff of the romantic (as well as of romance) runs through the pages, and if Malone and Jane seem to plunge from the frying pan into the fire quite often – well, it certainly kept me turning pages. There’s some great character moments here, as well as some smartly written dialogue – and the plot runs along nicely. It kept me guessing and kept me reading late into the night. If you’re looking to start a new series, then it’s worth going back to The Buried Life and working your way through the series. If you’re looking for a conclusion to the story of Recoletta, then I can recommend this wholeheartedly.