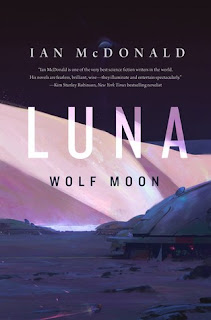 Luna: Wolf Moon is the second in Ian McDonald’s Luna series. I took a look at New Moon, the first in the series, back in 2015. Its portrayal of a Moon split between five family-run mega-corporations, where every breath has to be paid for, was stark, unforgiving, and captivating. The sequel thus had some fairly large shoes to fill.

The sequel brings us a world whose balance has abruptly changed. Where five families, the ‘Five Dragons’ ran the Moon, now there are four. Corta Helio, providers of helium used in Earth’s fusion plants, have fallen. Their holdings have been seized by another family, their staff appropriated, and the family that served as senior management either fled or brutally killed. The world is out of balance. The MacKenzie’s, one of the other Dragon families, have seized Corta Helio assets, and are now consolidating. The other Dragons are alternately nervous, and looking to shift matters to their advantage. This gives us a chance to see some of the Moon that we haven’t explored before. There’s the MacKenzie Metals HQ, lit by mirrors which also act as smelters. Or the mysterious court of the Sun family, with a similar penchant for light arranged through cunning engineering – but deployed with an eye toward manipulating power, rather than controlling it.

The moon is also still, well, the Moon. Everything has a price, and nothing is free. There’s something of an eye toward the underside of the world here, keeping track of how those who aren’t industrial magnates spend their time and money. There are sections set on the surface, for example, following prospecting teams – and they’re terrifying. That any pressure leak, any incident, any lapse in control, could be fatal – either instantly or, more horrifyingly, over several hours, is a common refrain. It leaves the text and the reader with a running thread of caution, an effective link into the world of Luna. The Moon is, it turns out, always trying to kill those that live on or in it.

This is a world of triple redundant systems, of airtight bunkers scattered in case of emergencies, a world where a gunshot is a catastrophe in the making. It’s lethal and beautiful at the same time, and if we saw that in New Moon, Wolf Moon emphasises the point once more, and gives us new ways to see the harsh, uncaring beauty of the Moon. This is especially so given that there are a few segues onto Earth, a world where oxygen is considered a right, and not a privilege – and the costs of travel in both directions are explored in detail, both the physical (shattered muscles, broken bones) and the more abstract. Wolf Moon gives us a world on the edge – either rof disaster, or of becoming something greater than before.

There’s a whole host of characters in play here, and everyone probably has their favourites from the first book. Watching the relationship between Ariel Corta and her bodyguard was a delight this time. Ariel is a woman learning to live with the consequences of the last book, struggling with her own lack of power, and the level of dependence she now has on others – a fish out of water on several fronts. Watching her bicker and backslide, fall into a hole and plan her way out of it – well, it makes for a gripping read.

Wagner, one of the other survivors of the Corta clan, is a ‘wolf’ – torn between extremes of personality, depending upon the calendar. Our time with Wagner gives us access to the odd world of the wolf pack, a space where human loyalty ties up in a rather odd, charmingly edged sociological expression. Wagner has to deal with the disruption of his habits by family, and by the change in circumstances – and that struggle, the desire to bring together or break apart from pack and family, is one of the central cores of the narrative – and one with tenderness, truth and pain at its heart. There’s more here – Mackenzie and Corta, Sun…all of the five families contribute heroes and villains of their own. It’s to the credit of the text that each feels human – even when we only dip into their loves and feuds for a brief period.

The plot – well, without spoilers, it’s a tense political thriller. There’s plots and counterplots happening here, with wonderfully byzantine complexity. There’s paradigm shifts in political geography here, alongside knife-fights and runs through hard vacuum. The prose hangs together well, with a tight narrative which compels the reader to keep reading, to see just how it’s all going to end.

Is it worth reading? New Moon was one of the most interesting sci-fi novels of 2015, with smart ideas on humanity and economies matched by street smarts, political brawls and murder in the streets. Luna: Wolf Moon turns that up to eleven – it’s a fascinating story, which is also a tense, enthralling read.