The Bear and the Serpent - Adrian Tchaikovsky 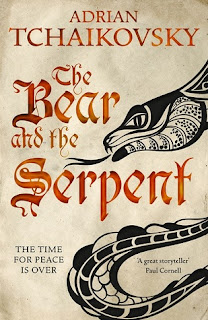 The Bear and the Serpent is the second in Adrian Tchaikovsky’s Echoes of the Fall series. I read the first recently, and was favourably impressed.  This sequel follows Maniye and her band as they head south, into the lands of the Serpent – which is a very strange place indeed.

The Kingdom of the Serpent is set along a river, surrounded by an arid, marginal landscape. The delta. The river, though, thrives with life, both on the banks and in the water. There’s more than a few crocodiles floating lazily along the currents, and quite a few of those may actually be shape-shifted people. This is a land built around notions of order, and of what the Serpent priests refer to as civilisation. Where the more northern climes were populated by feuding clans, here there is an absolute monarchy, backed by noble houses. Which, of course, means politics. But, as alluded to in the first book, this is also a civilisation in crisis. An absolute monarchy, ruled by blood, was not prepared for the birth of competent twins. Now parties are split over the succession, and politics has the chance to become the edge of a blade. The South carries this whiff about it – a determination to keep the peace, and a willingness to sacrifice what may be perceived as right in favour of a greater good. It’s a thronging hive of towering buildings, nestled in a swamp – and in both cases, the atmosphere is one suggesting danger lurks just beneath the surface.

We also spend some time back in the Crown of the World. As the Wolves and the Tiger settle into an uneasy peace, the Bear finds that they have a new problem. The North is familiar from the previous novel, but its cooler climes and less sinuous relations make for a nice break between the intrigues of the Serpents. We get to see a little more as well – the barren desolation of the Northern coast is well done, the Seal tribes living there relying on fishing to survive, thought odd by their compatriots for living near the water. The Crown of the World is a region looking for direction, for reasons to continue old feuds, or start up new ones – and that makes for nervous meetings, and a sense of encroaching doom.

The characters are broadly familiar from the first book. It’s great to spend more time with one of the Bear, those slow, rumbling, reluctant warriors. Loud Thunder is very much unwilling to lead, a man more content in being alone than even the rest of his people. But he’s drawn to doing the best thing for those around him, trying to convince all of the disparate clans and tribes that it’s better to work together than tear each other apart over old grudges. That shift in character, that journey from a man who just wants to be left alone, and let the world go its own way, to one determined to shepherd scrapping groups toward a coalition of the willing is a hard one. It’s one drawn out by conflict, by self-analysis, and by a willingness to face a need for change. Loud Thunder is a man realising his potential, however unwillingly.

We’re also following Maniye in the south, surrounded by her crew of outcasts and reprobates. She’s no longer the scared girl we saw in The Tiger and the Wolf. There’s more confidence here, a sense of certainty that was missing before. That said, Maniye Many Tracks, the legend, the champion from the north, is now learning that she has responsibilities. She has a band to look out for, as they look out for her – and the rise of that understanding, that she is the face and voice of her people, is fascinating to watch. Maniye remains a strong personality, and she’s slowly forming into a force to be reckoned with – and the reader is along for the ride on that transition.

There’s a whole raft of supporting characters floating around here, from rulers to hedge witches. Charmers and vicious killers – and some who are both at the same time. They’re there in abundance though, keeping the world alive for the reader – and if some are less sympathetic than others, they don’t feel any less real for that.

The plot – well, without spoilers, some sections feel like a political thriller in a fantasy world. There’s daring escapes, more than a little scheming, and the fate of nations hanging in the balance. But there’s also an intimacy there, tracking the characters personal journeys – and a sense of being involved in a larger conflict bubbles through the text. Tchaikovsky has written a clever, compelling page turner, with kinetic duels, high stakes, and characters you’re drawn to care about – and that means The Bear and the Serpent is a cracking sequel to The Tiger and the Wolf
Posted by Chris at 12:00 AM