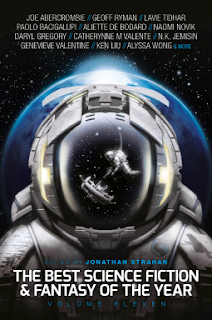 This is the eleventh annual collection of SF&F curated by Jonathan Strahan. Previous entries in the series have included some absolutely stellar work, and the opportunity to explore some great new authors, so I had high hopes for this one – and, generally speaking, they were met.

Much like the last couple of years, this is a very diverse collection of material. There’s sharp, punchy , grimy fantasy from Joe Abercrombie – bringing us a dynamic duo, a thief and a fighter, and unleashing them on the world with acerbic humour, and a low tolerance for mistakes. There’s the creeping body horror wrapped around modernity of Sam Miller’s “Things with Beards”. There’s sweeping epic fantasy, new worlds defined alongside personal triumphs, and more often personal tragedies – like Seth Dickinson’s “Laws of Night and Silk”, and there’s fantasy like folk tales, pulling on half remembered truths to shape something new.

There’s big questions on display throughout the collection, though their answers differ. “The Great Detective”, for example tackles the idea of what it means to be sentient, cloaking the query in a delightful blend of steampunk and Holmesian period drama. The mystery is intriguing, and the protagonist charming, and we rattle through the streets of a London laced with ghosts and clockwork mechanicals whilst pondering the meaning of their existence. Then there’s Yoon Ha Lee’s “Foxfire Foxfire” – where worryingly intelligent animals cut deals with gods and men, examining who they are and who they wish to be, and occasionally cutting the odd throat. This feels like another strand – a narrative with the feel of a legend, mixed with something new. The chatacters claw their way off the page, compelling, often dark, sometimes deadly. There’s stories here which can be disquieting – watching three friends and a new arrival sit around a table and tell stories, reveal something of themselves, their vulnerabilities in Alice Sola Kim’s “Successor, Usurper, Replacement” feels like teetering on the edge of a cliff, unable to warn someone stepping off.

Then there’s N.K. Jemisin’s “Red Dirt Witch”, a meditation on class, race and family, with a supernatural twist to it. The prose is evocative, bringing a small town of the American South to life, as we watch Emmaline, single mother, only occasionally supernatural, try and preserve her family from otherworldly influences. The supernatural here accentuates the questions of class, race and family that Jemisin explores, and makes for a very powerful story. On the other hand, it’s notll serious - there’s the wry comedy of “Even the Crumbs Were Delicious”, a story somewhat reminiscent of Phillip K. Dick – watching the well meaning, bumbling protagonist try and hunt down the parents of two lost teenagers is entertaining and rather sweet; that they’re high as kites on 3d-printed designer drugs is an added bonus, and often rather funny.

As with last year, there’s always going to be some stories you like better than others. That said, the range on display here means there’s something for everyone, and the aggregate level of quality continues to be very high. There’s a lot going on here – stories that challenge, that delight, tradgedies and comedies, broken worlds, aliens and fairy tales, all inside an extremely imaginative package.  On that basis, I’ve no hesitation in recommending it to lovers of sci-fi and fantasy–and also to everyone else. It’s packed with imaginative, ingenious stories, and is very, very difficult to put down. Thoroughly recommended.