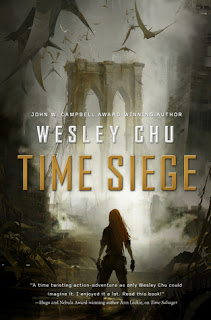 Time Siege is the second in Wesley Chu’s “Time Salvager” series (the first of which I reviewed rather favourably last year), which follows the troubled time traveller James Griffin-Mars, as he attempts to break free from the control of corrupt corporations and a broken Time Agency, and attempt to rehabilitate both himself and the future.

The world of Time Siege is, well, in many respects not a pleasant one. Its Earth is struggling through seemingly endless ecological cataclysms – earthquakes, endless lightning storms and funnels over lakes, the omnipresent “Earth Plague”. This is an ecosystem on a precipice, and it’s to the author’s credit that it feels lived in and humanised, as well as potentially deadly. There’s some wonderful backstory laced through the text, part of character reminiscences or establishing moments  - its built in organically, rather than through an infodump. We get an eye on several of the far flung colonies of the solar system, looking at both the successes and the rather unpleasant failures, as well as leaping into the past of Earth and…other environs.

The other colonies are particularly revealing – the suggestion of a clean, stark Europa, a land of limited resources and absolute control, contrasted with stories of a failed state, one where laxer controls led to rule and obliteration by the mob. It leaves us, if not willing to countenance corporate control, at least able to understand the environment in which it has been fostered – where laxity may be fatal, and where the private sector controls the air you breathe. A dystopia, to be sure, but a plausibly human one, where those on both sides of the line don’t see themselves as villains.
There’s a little time with pre-collapse timelines as well; we see Spain in the grip of a ravaging by malevolent AI, and the great space-faring conflict that threw apart humanity’s diaspora in a blaze of fire. Both end in fire and blood, and the heat and the reek of iron pour off the page. There’s quieter times too – a Venusian civilisation in slow decline is a nice touch – but it’s telling thta the further down this timeline we go, the worse things appear.

We’re mostly dealing with the same characters as in the preceding book, at least initially. More room is given here to James Griffin-Mars, the salvager of the previous text, with special attention focused on his relationship with Elise, whom he rescued from a past catastrophe. James is…complicated. Acerbic, often unpleasant, a man with a selfishness ingrained by his own expected lifespan and the social pressures defining his universe. He is, if not a bad man, certainly an unpleasant one from time to time. He’s given purpose, at least in part, by Elise, whose view of things is more optimistic, coming from a time before the world was quite so catastrophically broken – to James she is, then, an avatar of hope. That she loves him, complex and cracked though he is, helps keep his personality on an even keel. But still, there’s  issues – James suffers from  substance dependency, from what feels like a stress disorder, and is clearly a man struggling with himself and his own worst nature. This is approached sympathetically, but unflinchingly – we have a protagonist with, to put it mildly, problems, and they are not ones which the text feels the need to ignore; in fact, quite the reverse. There’s an honesty coming of the page here, a rawness which gives James genuine humanity, flawed as he is.

Elise we see less of, but she’s growing well into her new role – leading a people without much in the way of technology, on the run from mega-corporations that want her for some nefarious purpose. She’s compassionate, hard-headed, and willing to take risks. Over the course of the text we can see her steady evolution into committed leadership. Of course there’s other sparks there as well – her unfeigned affection for James, and concern for him, mixed up with her own responsibilities to the people around her. There’s a struggle here too, as she tries to have her own life, to improve the life of those around her – and to try and improve on the future.

They’re more than ably assisted by a supporting cast of new and old friends (and enemies). I always enjoyed the acerbic wit of the Mother of Time, and it’s great that she gets some space on the page. But there’s others too – the group of youths bound to James by a need to learn, a desire for a father figure. The crotchety, wry Venusian doctor. The villains – oh my, the villains. There’s the director of the time agency, trying to muddle through under the increasingly grasping hand of the Valta corporation. And there’s the Valta Securitate, driven to perform atrocities, not for the sake of it, but because she believes they are necessary. There’s a disturbing humanity to the Securitate – she carries her own demons, and they drive her to do what Valta asks – perhaps more brutally than necessary. Still, she has, if not hidden depths, at least lightly stealthed depths, and manages to feel like both victim and horror.

The plot – well, as usual, no spoilers. But there’s a lot going on. Urban warfare. Prison breaks. More time jumps. Chronmen using exo bands to explain the merits of their arguments – often fairly explosively. The text ramps up quickly, and thereafter it hurtles along gleefully, a joyfully breathtaking ride. It was a lot of fun to read – examining serious questions, but doing so interlaced with some great character scenes, and hair-raising action. By the close, things have once again changed rather dramatically – I’m already desperate for the next book in the series.


Is it worth reading? I think you’d want to read Time Salvager first – but thereafter, yes, absolutely. There’s explosions. There’s fist fights. There’s sharp wit, and poignant dialogue. There’s people being, well, people, the best and worst of us, in a detailed, believable, broken world. It’s a great entry in the series, and left me wanting more. Give it a try.
Posted by Chris at 12:00 AM