The Thief Who Pulled on Trouble's Braids - Michael McClung 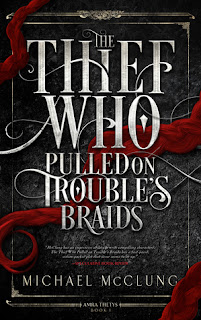 The Thief Who Pulled on Trouble’s Braids is the first in the Amra Thetys series by Michael McClung. Thetys is a competent thief, who uses her wits and the occasional application of force to stay one step ahead of the law. All she wants is to have a quiet life, and a decently sized retirement fund. Unfortunately for her, she’s going to have an adventure instead.

Amra’s world is one of active magic, one where a cataclysm wiped out a major civilisation, and left survivors  scrabbling to rebuild. There’s a fair amount of social construction under the surface – allusions to mass migration of refuges after a total disaster, for example. There’s also a fair amount of history, which is quietly laced through dialogue and world description – the odd mysterious ruin, references to long-ago conflicts, and so on. I wanted to hear more about Amra’s wider universe, but what there is provides valuable context, and acts as the bedrock for the more immediate descriptions. There we’re on safer ground – though the city in which Amra makes her home feels familiar, filled with arrogant nobles, snotty policemen and slithery criminals, it’s still sufficiently well drawn to make the environment seem alive. There’s a vibrancy and energy coming off the page from the environs – they’re plausible, detailed, complex, and suggest a living, breathing world around the protagonist.

Amra, as a protagonist, is rather a lot of fun. She’s smart, quick, and interesting. Not a moral character, per se, but one with deep loyalties to friends. She’s a charming, pragmatic rogue, with a penchant for one-liners, and the ability to fight her way out of at least some of the sticky situations she ends up in. Over the course of the text, her loyalties are tested a little, and the reader gets to see her expand outside of her behavioural comfort zone – taking on a wider view, perhaps. In any event, she’s a lot of fun to read. There’s moments of icy calm, the kind of analytical thinking that keeps someone alive after a heist has gone dreadfully wrong. Then there’s the cheerful banter she shares with colleagues, and the more formal, focused approach she uses for clients and allies. Amra Thetys is a woman of many faces, but comes off as genuine beneath them all, a woman trying to make her way in a city that isn’t just full of bad people – but also rogue magic, daemonists, and other magical oddities.

Then there’s Holgren, her on-again-off-again colleague, a man who qualifies as a magical oddity all on his own. Somewhat acerbic, with his own focus, which may or may not merge with Amra’s, Holgren is just as entertaining. He has a tendency to mix wry observations and grumpiness with the ability to make people explode from the inside, so clearly not a man to be trifled with. Whilst we’re seeing Amra grow here, as she tried to work out who wants to kill her this week and why, Holgren is a rock of certainty, a man settled into well maintained habits – and in embodying those habits, he feels entirely plausible, and, oddly, rather likable.

There’s an assortment of other rapscallions here as well. I rather liked the competent, smooth, and somewhat dangerous feeling police inspector, and there’s a nobleman or two on the page who manage not to be total idiots in some fashion or other, which is rather nice. The feel from the villains is, in a lot of ways, more absolute – trying to get into their morals and motives is left secondary to watching them scheme, rampage, and generally slither in and cause havoc. Still, there are some careful nods in the direction of, if not grey areas of morality, at least a recognition that the villains of the piece also have their own points of view, that they may be the heroes in their own story.

The plot – ah, I did love this. It feels like someone took a dram of Chandler and a soupcon of Hammett, and blended them into this fantasy world. The noir themes are strong, and there’s a delightful string of byzantine crosses, double crosses and triple crosses. Motivations are obscured, trust is hard to come by, and everyone seems to be looking out for number one. Then there’s some brilliant chase scenes, a sense of high stakes wrapped within an intriguing mystery – and a feeling that no-one and nothing is quite what it seems.


Is it worth reading? Emphatically yes. It’s a clever, high energy book, with an absolutely top flight protagonist, and a plot which kicks off from the first page, and didn’t let me put it down thereafter. It’s a fantasy, a mystery, a character piece with an excellent plot – and really rather enjoyable. Give it a try.
Posted by Chris at 12:00 AM