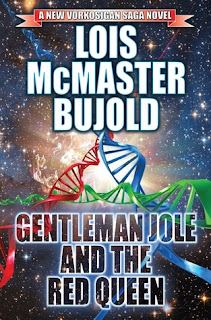 Gentleman Jole and the Red Queen is the latest in the ‘Vorkosigan’ series of books by Lois McMaster Bujold. It follows Admiral Oliver Jole, one time aide and friend of Aral Vorkosigan, as he struggles to decide which path his life should take, a few years after Aral’s death.
In the interests of full disclosure, I’m a big fan of Bujold’s Vorkosigan saga – a sprawling series, taking in several generations of characters over a variety of celestial geography. So I went into this book with a reasonable level of setting context  and fairly high expectations.

The universe of the Vorkosigans has been extensively detailed before now, but we get to see a more intimate view of it here. There’s some time spent in and around a lake, and each blade of grass and each rustic boathouse is carefully, intimately described. There’s a sense of age and place there, a feeling of sanctuary and closeness which has been carefully constructed. There’s a little bit of time spent in the orbital stations as well, and that had a sense of isolation and anonymity, but the core theme here is matched by the environment – a complex living thing, filled with contradictions, but vividly, vivaciously alive for all that – a hive of complexity and compromise, and a place that is beautiful and deadly in equal measure.

But this is mostly a character piece. Oliver Jole is a middle-aged career military man, conflicted in his life choices. He struggles over whether to allow a child (or children) into his life, and over whether his days of having a meaningful relationship are now in the past. Jole is a rarity, a mature protagonist, not concerned so much with drama but with his own internal agonies. In that space, he succeeds convincingly, and completely. There’s a fatigue there, a character worn down a little by life, and an energy, a desire to see something better, to do something better with themselves. Oliver Jole is a man on the cusp of a life decision – but which direction he’ll go in is unsure.
Part of that process is his relationship – built with the Viceroy of the planet he handles the military for, Cordelia Vorkosigan. They were both involved in a complex relationship with the same man, and both are now struggling to come to terms with love, life and loss in the shadow of that man’s death.

It’s difficult to articulate how nuanced and accurate the author’s portrayal is here – there’s something of the more mature in the way Jole and Cordelia interact, a slow and cautious courtship, an ember bursting into gentle flame. It’s tactful, careful, and makes perfect sense given the context.
In both cases, these are individuals driven by their past. Cordelia’s is familiar to Vorkosigan fans, but there are enough hints of previous pain and old wars here to allow a new reader to feel up to speed. Jole is largely new to all of us, but his internal monologue is convincingly charming, logical, and occasionally a bit fraught. He feels, in fact, like a man feeling his way into unsure terrain. There’s a certain veracity to his experiences, a sense of honesty which makes it all feel real – both the slow-burn of romance and the sharp agonies of old pain.

The plot, really, is the characters. Their gentle dance is one which is a joy to watch, and in the meantime we’re treated to some charming and entertaining dialogue. There’s a smidge of drama laced throughout, sparking in the vision from time to time – but really, this is a character duet. It’s a tale of two people struggling to find love, whilst remaining secure in themselves – and in that, it succeeds marvellously.

If you’re a Vorkosigan fan already, this one is well worth picking up, expanding the story of Cordelia and offering a whole new perspective on one of the key relationships of the series. If a new reader, I’d advise starting with the beginning of the series – but this works as a gentle romance with an intergalactic setting, and will reward the closeness of a new reader as well.
Posted by Chris at 7:57 AM