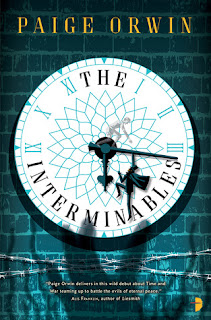 The Interminables, a debut novel from Paige Orwin, is an interesting blend of superheroic dystopia and action adventure.  It’s got some very clever ideas in play, and a plausibly broken world. The story sits reasonably well in the world, with stakes high enough to keep you turning the page.

The world is one in recovery, inching back from the precipice of disaster. Magic existed alongside what we think of as the ‘real’ world, keeping a low profile. Then a powerful entity burst back into the world, and shattered civilisation around it. Infrastructure crumbled, government consolidated, and a magical war erupted in an effort to preserve what remained of society. This is what’s left. The narrative sphere of interest is some of what is now the US east coast, significantly farther inland than it used to be. Orwin’s world is one on the edge of recovery, pulling itself up from the scars of a war which cracked the earth and left portions of the environment inimical. The author does a great job immersing us in this milieu, one of exhausted, driven individuals, slowly rebuilding what was lost, always with a wary eye on the possibility of greater horrors rising from the depths.

In this case, the wary eye is cast by Edmund and Istvan. The former is, well, a wizard. He can avoid death, teleport, and cause all other manner of mayhem. There is, of course, a price for this kind of power – in part it’s driven by the moral regret and ethical quandary his use of power pushes upon him, and in part by…something else. Edmund exists in both a real and a narrative sense – he has a persona, a hero, and when embodying that persona, he is something more powerful than he is alone, whilst also becoming something perhaps a little less than human. Then there’s Edmund the man, a tired, shaky individual, suffering from stress and trauma brought on from surviving a war, dealing with the consequences one drink at a time, whilst trying to live up to his self-inflicted heroic mantle.  Orwin’s portrayal of a man struggling to deal with his own survival is gentle, nuanced, and uncompromising.

At his side we have Istvan – a stronger personification of the narrative principle, a conceptual embodiment of the Great War. He’s loyal, cares for his friends, and is bound in magical chains to prevent his eruption into a catastrophe of global proportions. Where Edmund is a study in contrasts, Istvan is an absolute looking for some dilution, a concept slowly learning to become a person.  He doesn’t quite have the same kind of emotional heft as the somewhat-functional Edmund, but, paradoxically, contains a measure more of joi-de-vivre, his energy crackling off the page into the reader.

They’re assisted by a diverse, if somewhat sprawling supporting cast, ranging from a cyborg with a hidden agenda to a hard-hitting force of nature, a researcher with a forthright attitude, and…a less than friendly cat.  I would like to see more of these individuals – hopefully we’ll spend more time with them in any sequels – but they work as foils for our protagonists for now.

The plot is decent enough. It takes a while to get rolling and introduce us to the characters, and there’s the occasional lull which could have done with spicing up a little. In part this is because there’s a struggle to explain everything that’s going  on, quickly and concisely to the reader – by the close of the book, it was working well, but the early sections can limp a little until you’re up to speed. Still, at its best, this is an imaginative, fast-paced, buccaneering read, Indiana Jones with heroes, magical monstrosities, and with the fate of the world resting on the shoulders of our suffering heroes.

Is it worth reading? Yes, I’d say so. The world is vivid and has as-yet unplumbed depths. Likewise the characters, which are delightfully flawed, and feel  wonderfully real. The narrative stumbles a little out of the gate, but overall it grabs on to the attention, and rewards emotional investment with a strong payoff. If you’re looking for an entertaining piece of dystopian fiction, with magic and heroes and..er..a cat, then this will suit you very well indeed.
Posted by Chris at 12:00 AM