The Price of Valour - Django Wexler 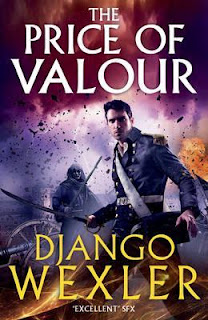 The Price of Valour is the third in Django Wexler’s Shadow Campaigns series – a character driven work of military fantasy.

The world of The Shadow Campaigns is one somewhat reminiscent of France on the cusp of the Revolution, or the later Napoleonic period. There’s a growing sense of industrialisation, and collapsing of class barriers in a society previously heavily stratified. There are ‘new men’ rising through the military, loyalties unbound to the nobility, tied to the nation and the king – risen on merit. Events of the preceding texts have left society in turmoil – the King is dead, his daughter borne to the throne on the backs of a popular revolt, the traditional centres of power and control cast down. The book opens on an abstract maelstrom, a whirling potential for change, mixed with a deadly risk of failure.

A good portion of the text takes place in the capital city of Vordan, now in something of a crisis. The people (or perhaps The People) have power now, electing a series of representatives to speak for them on issues. But in many ways, these individuals are powerless, as each faction seeks to establish a political monopoly, and the creaking strains of tyranny can be heard behind the political rhetoric. It’s an excellent portrayal of a capital coming to grips with a new political situation – opportunistic chancers grasping at the reigns of power, and idealists, faced with having to enact their ideals, teetering on the edges of blood-soaked mania.

Outside of the city, we continue to get a detailed, sympathetic and honest view of army life alongside some of our protagonists. Their campaigns are still reliant on set piece battles, but there’s a lot of marching to do for those to occur – and rather a lot of blood, sweat and mud makes an appearance. It’s not all grim, and there’s an atmosphere of solidarity in the troops. But there’s struggles here too – especially in the clash of genders, as the all-female segment of the Vordan military continues to grow. Clashes between more traditionally minded officers (and men) and the women fighting alongside them add an opportunity to talk about gender and role expectation, in a rather nuanced way – though admittedly it comes alongside cannon fire and the occasional duel.

From a character standpoint we get to spend some more time with Raesinia, now Queen, as she attempts to get a grip on her fractious, squabbling kingdom before it falls apart from internal disorder or external warfare. She’s somewhat harder now, a woman accustomed to taking action, and accepting the responsibility that the results of that action will require of her.  But there are still touches of the younger version here and there, and a determined compassion which keeps her grounded and sympathetic.

Then there’s Winter Ihernglass, whose rise through the ranks of Valnich’s army has been somewhat meteoric, if entirely deserved. She has a penchant for unorthodox military manoeuvres, and her authority in a public persona leaps off the page. But there’s a more fragile Winter shown here too, trying to make a relationship work with a woman under her command, a woman who doesn’t have the same respect for the army life, or her commander, as Winter does herself. You can feel their passion in their declarations of affection, and in the lethal silences embedded in their arguments. Winter is caught in a crux between duty and personal happiness, and her struggle to resolve this is painfully honest in prose.

Valnich himself, the genius general, makes less of an appearance – seen more through his plans than in person. Still, watching him now, there are hints of an agenda, of a man who wants to shape something, create something. There are hints of a larger shadow over the man, whether his own legend or something else entirely – what we saw here was effective, but I want to spend more time with Janus Valnich.

The villains range from the corrupt and venal, through the misguided, to the duty driven and dangerous. I wouldn’t say that they’re sympathetic; in most cases, they’re far from it. On the other hand, they are understandably malicious, driven by internally consistent goals, individuals, rather than massed ranks of evil. Appearances on the page were often met with a visceral reaction of dislike – a credit to the author’s crafting of their antagonists, I think!


The plot – as ever, no spoilers. But Raesinia has to deal with complex internal issues within the kingdom, struggling to hold it all together. This gives us subterfuge, intrigue, and delicate political manoeuvring – as well as knives in the dark. Valnich and Winter have external threats, and there’s some more of Wexler’s painstakingly lavish battle sequences, which manage to provide a comprehensible strategic picture whilst also being inside of the emotional moments of combat. It’s a page turner for sure, each page a step along what is apparently a very high stakes game. I tore through it, wanting to know what happened next on every page. If you’re not into the series, and are looking for a piece of solid military fantasy, driven by complex, human characters, then this is for you. If you’re already caught up with the first two books in the series, then this one is a more than worthy successor – I’m already looking forward to the next one.
Posted by Chris at 2:51 AM