The City of Ice - K.M. McKinley 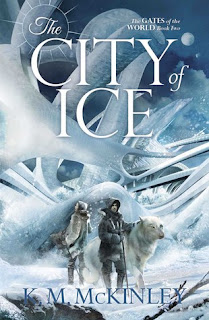 The City of Ice is the second in K.M. McKinley’s “The Gates of the World” series. We reviewed the first, “The Iron Ship” a while ago. It impressed with a sprawling and imaginative geography, as well as a social setting which was, at the very least, intriguing, whilst providing an enormous cast of well drawn characters to populate the world; it was a tour-de-force for the imagination, if a little lacking in focus. The City of Ice works hard to pare things back to a manageable level, and it succeeds – at least most of the time.

There continue to be a multitude of point-of-view characters. Several of the family Kressind are only available for key scenes, but others have an ongoing role in the narrative. There’s the heiress, determined to provide for those working in her mills, coming slowly around to unionisation as a binder for being humanitarian. There’s the speaker-to-the-dead, investigating why the recently deceased are stronger and more determined to hang around and make trouble for their descendants. Then there’s the shipwright, the man who built a craft of iron which is able to ross polar oceans, toward a purported hidden city. These  are the Kressind siblings with the clearest roles; it’s interesting to see the Speaker wrestle with his conscience, a man determined to do the right thing – though perhaps not at any cost. He’s tenacious, determined to think things through – but has a willingness to compromise growing from the pressures on his character which is interesting to watch. By contrast, there’s the efforts by his sister to act as a focal point for labour rights. Here is someone insecure in their own heritage, but determined to forge onward, to take an aggressive role and lock down what they see as the right thing to do – via direct action and politivs, when required.

Both feel overshadowed by the engineer, the Kressind who created the impossible – a self propelled craft powered by magic, driving through the arctic seas in search of a lost city. There’s a certain idealism, and an Indiana-Jones quality to his ideals, which makes these sections especially piquant.
The Kressinds are joined by a large supporting cast, from the seemingly friendly but potentially lethal fae-esque creatures (one asks their putative master not to release them, because then the fae will be free to murder them), through mages, whose strength is based on their ability to shape reality to fit their perceptions, to the alien Morfaan, a seemingly advanced species, the remnants of whom are, at the very least, damaged, and may not be as benevolent as they appear.
The result of which is, there’s a lot of fabulous character building on display here. It’s a diverse, complex cast, and the ties between friends and relatives are believably done, and just as fraught as you might expect.

The world is at least as broad as it was from the first book; but there’s a tighter focus here – the most memorable environs are those of the tundra surrounding the titular City of Ice. Its to McKinley’s credit that she can bring us a thriving urban cityscape, an urban metropolis brought together by expectation, a thronging mass of humanity, each individual part of a whole – and also the stark white of a polar region, populated by a small band of explorers, on the hard edge between life and slow starvation; both are plausible, and both feel real – the muttering heat of a city before the arrival of an expected sign, the hard deals and cut-throat politics – and the stark simplicity of the ice, driving towards and unknowable, seemingly impossible goal – in all cases, this is a world which lives and breathes, I’d love to see more of it, but as with the previous book in the series, I’m sure more will become available as the story continues.

The plot is, at least seemingly, more focused than the first book. We’re following an expedition toward a polar region on their quest, and tracking the Kressinds as they meddle in the politics of their region. Gradually, the feeling that there is more at stake becomes more concrete – though as always with the acquisition of knowledge, there’s a price to pay. This is a book with significant emotional depth, which is unafraid to explore both joy and sorrow, in the broader and the micro states – and the consequences that both can wreak on families.  There’s some interesting revelations here, chasing up hints left in the first book – and some explosive and cleverly defined magic as well. There’s duels, which I admit I sat through with heart in mouth – and compromises, and alliances and stark betrayals.


In the end, this is an excellent sequel, ne which delivers on the promise of its predecessor. It may lose some mystique by beginning to explain some of the mysteries left by the previous volume, but it’s a tighter and better crafted volume overall – and a fascinating addition to the series. You’d need to read the first volume to really keep track of what’s going on – but having done so, this second volume gives you access to rich characters, in a vivid and convincing world – and I, for one, want to know where they go next.
Posted by Chris at 12:00 AM