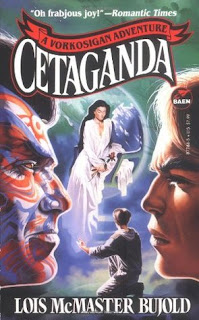 Let’s talk about Cetaganda. It’s the name of a sprawling, multi-system empire of demi-humans in Lois McMaster Bujold’s ‘Vorkosigan’ saga. It’s also, perhaps not entirely coincidentally, the name of one of the books in the saga, which deals mostly with Miles and his interactions with the Cetagandans.

The setting is, for the most part, Cetaganda itself – the core world of the Cetagandan Empire. After the claustrophobic stations of The VorGame, and the frontier-medieval blend of Cordelia’s Honor, Cetaganda brings us something else again. It’s a garden world, a space filled with what the inhabitants think of as high culture, the pinnacle of their civilisation. The Cetagandans are, of course, a bit odd. They have what appears to be a reasonably affluent, if heavily controlled society, initially ruled over by the Ghem, the soldier-caste. Their fleets turned up in The Vor Game, and the Ghem on display here are focused, duty oriented, and highly competent. The Ghem act as the hands of the Haut, a sub-group acting as overseers of the Ghem. The haut handle the cultural and social niceties of the Empire – producing art, drama, horticulture and so on. But they also dabble in genetics. The Empire is, essentially, a giant petri dish for the human experiment – seeing what works and what does not, what may be a useful survival trait, what may need to be cut out – but exercised across a huge social space, with a huge population. The Haut are, at the very least, somewhat sharper than they appear.

Cetaganda is a melting pot of sorts – and one with more than its fair share of scheming. Both the reader and the characters can be dazzled by the sophistication on display – which finds perfection in both social occasions and assassination attempts – but there’s internal struggles here too. If not as physically claustrophobic as the stations of The Vor Game, Cetaganda is a world bounded by social strictures, where a wrong move can end extremely badly, and where it’s a reasonable presumption that the game is rigged before you start. Still, Bujold is showing us highly cultured, in several senses, society, one carefully and cautiously controlled – without the energy of Barrayar, but with more calculation applied instead. It’s an amazingly beautiful, potentially poisonous place, and the mixture of delight and venom seeps off the page.

The characters – well, the focus here is on the central duo of Miles and his dutiful, womanising, ever-so-slightly reigned cousin Ivan. Ivan serves as Miles’s foil and body-man throughout – he’s perhaps more staid than Miles, and certainly more lazy. There’s a sense of intelligence kept under wraps there, which we may see more of in later texts, but Ivan is definitely smarter than he looks. Of course that wouldn’t be too tricky. Still, here he tends to fetch and carry for Miles, point out moments when his cousin is about to go entirely off the rails and, occasionally, suffer the consequences of some plot or other backfiring. I’m a big fan of Ivan here – the everyman, the avatar of the reader, pulled along in the wake of the small whirlwind of focus that is Miles Vorkosigan. He does a wonderful line in put-upon desperation which is rather charming, and has a clear desire to just do things in straightforward ways, to cut through Gordian knots so that he can get back to the bar.

Miles – well, Miles is the same and different here. When last we saw him, he was preventing intergalactic wars. Here he’s been sent on an ostensibly harmless diplomatic mission; but sent as a representative of Barrayar. This is a tidier, more restrained Miles – a man holding himself within the bounds of duty even more tightly than when he’s running fleets and masquerading as ‘Admiral Naismith’. His word is his bond, his honour is sacrosanct, and when trouble falls into his lap, he gratefully seizes it with both hands, shakes it, and informs Ivan that no, they won’t be going to the bar. I wouldn’t say he’s grown up – the man is still a dynamo, still keen to live up to the reputations of his parents and the older family generations. This is a Miles determined to make something of himself, but still not entirely sure who he is, or exactly what it is that he wants himself to be – apart from “something”.

The plot is a lot of fun. There’s certainly fewer space battles on show than previous instalments. It feels like a detective mystery wrapped inside a sci-fi setting, with the occasional tense moment sending chills up your spine. Miles is on fine form as an investigator, traipsing through red herrings, obfuscatory officials and the occasional bout of violence. There’s a lot of pin-sharp dialogue here, lots of musings on why people do what they do, and discussions of motivations, crosses, double crosses – and the occasional revelatory moment when everything becomes clear, everything makes sense, and the narrative delivers.

Is it a good book? I’d say so. There’s a slower, tension ratcheting pace for the start, and by the end you’re rocketing along with Miles, waiting, if nothing else, to find out what happens next. It’s a charming, clever book, with a hidden edge to it, and some very clever ideas. SO yes, this one’s worth a look.
Posted by Chris at 4:16 AM