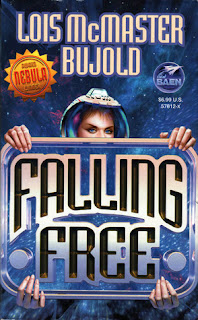 Falling Free is the fourth novel published in Lois McMaster Bujold’s Vorkosigan  series, and the next in my ongoing retrospective of her work up until now.. Confusingly, it’s also the first chronologically. The events in the book take place roughly two hundred years before the majority of the saga. Though the series has generally been possible to read as stand alone entries, this chronological separation makes the narrative stand apart from its fellows.

The setting, then, is perhaps somewhat familiar to regular Vorkosigan readers, but accessible to a fresh pair of eyes. Most of the story takes place either in an orbital habitat, sat above the gravity well of a lightly populated world – or on the surface of that same world.  Bujold manages to show us a planet with facets of the odd, where the light populationis concentrated in a company town, where there’s a sense of full employment – and out of the window is just a little hostile. There’s a sense of emptiness here, a feeling of a humanity somewhat humbled by the scale of everything around it – and what we see of activity seems futile in that grand scale, but also intimately human. It’s an odd place, which doesn’t seem desolate as much as sparse.

It’s also at least in some ways run by one company, which manufactures – amongst other things – habitats, and seems to employ rather a lot of people, both in and outside of the gravity well. There’s some interesting meditations here on the usefulness and the abuse of corporate power, and in giving people a stake in the dynamics and environment in which they exist.

The message is perhaps a little heavy handed, due to the part of the equation taking place on the orbital habitat. Here we find the first generation of ‘quaddies’, genetically engineered people with extra arms instead of legs, designed for zero-gee engineering. The quaddies are raised within a focused corporate environment, receiving education and training – and little else – from the supervisors of this rather expensive and expansive project. At the same time, they’re not allowed much in the way of autonomy; one of the corporate heads points out that they are in fact on the balance sheet as corporate assets, rather than employees.

The quaddie’s struggle for personhood and independence make up a cornerstone of the text, sitting alongside the rumblings of corporate paranoia and overreaction. Still, the quaddies, startling as they may be, are shaped by their environs. Here the author hits the spot perfectly – the habitat is confining, claustrophobic, and there’s a focus and energy crackling through the (artificial) atmosphere, compared to the more relaxed pace of life under gravity. It’s less a prison than a hothouse, a corporation determined to realise value from expensive assets, treating them with high expectations – and monitoring them accordingly. There’s a lack of privacy here, and a sense of small-group social norms which seems genuine and makes for a riveting read – especially when the small groups the reader can see run afoul of rules imposed from without, which come under faceless seals but have long term personal consequences.

Most of the readers-eye-view is done by Graff, a non-quaddie engineer assigned to the habitat to train the quaddies for their upcoming employment. Graff fits the mould in many ways – he’s gruff, firm, but extremely competent. At the same time there’s a humanity, a centred emotional coil within the man which allows him to empathise with the quaddies, to look upon them not as monsters, but as people – and as people having monstrous acts perpetrated upon them.  Bujold has always had solid characterisation, and her everyman hero here is exactly on point – as a man with skills, intelligence, and a will to put them into practical action, he’s an excellent viewpoint for the reader – and his gruff, methodical steadiness makes an interesting contrast to the heroes of other books in the series!
Several of the quaddies have regular roles, and if we don’t see enough of them, they have an energy and an enthusiasm for life that you can feel sizzling between the lines, which certainly kept me turning the pages. They’re mired a bit behind the need for technical dialogues every so often, which help give the environment its patina of authenticity – but lead the characters into some rather clunky dialogue.

The same may be said of the antagonist (of sorts), a corporate manager left to deal with the quaddies, to prepare them for work elsewhere, and to manage the experiment. He is, de-facto, the master of the habitat – but startlingly unsympathetic. There’s a sense that he’s not a genuinely bad man, and the ride as he slowly snowballs into some seriously bad decisions is artfully crafted – but it would have been nice to see an antagonist with a few more redeeming features.

Still, it works. The narrative starts a little slowly, gradually opening the world of the quaddies and their colleagues to the reader – but it picks up fairly quickly, and then sustains a reasonable pace throughout, on its way to a denoument which carries rising tension beautifully, and left me unable to stop reading until the end. The plot itself is fairly straightforward, set around the question of the quaddies humanity, and what they need to do in order to realise that humanity – with the theme of independence tied up with family and friendship as an overall package.

This isn’t a perfect novel, but it has some interesting things to say about people, and it says them inside a well realised, realistically written environment, with some charming characters – and on that basis, it’s worth checking it out.
Posted by Chris at 12:00 AM