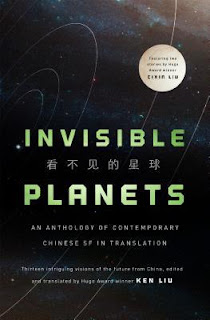 Invisible Planets is an anthology of Chinese science fiction, translated by Ken Liu. I’ve talked rather warmly about Liu’s own works before, and his translation of The Three Body Problem is particularly well regarded. Here, then, is a sampling of other modern authors writing science fiction in China – and, perhaps unsurprisingly, on the whole the collection assembled is rather good.

The stories here are grouped by author, and there are often two or three stories with the same author in the volume. It doesn’t suffer from that per se – each tale has a scent of the unfamiliar about it, a frisson of the unusual. The variety of settings is impressive – from a tired, disintegrating ghost town of robots, given the souls of the departed, through a city which folds in on itself, leaving two thirds of the population in artificial sleep for periods of time. There’s a near future where the overeducated and under-utilised serve in brigades fighting off swarms of seemingly intelligent rats – and another that deals with the arrival of ancestral creators to our world in their dotage. Each, constrained by the length of their tales, is seen in microcosm – created in a few brush strokes here, or a line of dialogue there – but I confess, I found each to be delightful, terrifying, or on occasion, both.  There were stylistic differences of course – looking at the graceful form, the fairy tale smoke of Night Journey of the Dragon Horse, and comparing it with the fraught, spiked freneticism of Folding Beijing – both use their prose to layer further meaning onto their worlds, to give an impression of the space that the protagonists occupy. In the end, the worlds on display here have a sense of place, a sense of alien otherness – but also a sense of familiarity, of humanity, which ties them back to the reader.

The characters carry a similar breadth. There’s the tired, driven, wondrous Dragon Horse – a creature setting out on a journey, looking for understanding and finding sacrifice and friendship, of sorts, in a world no longer quite what it recalls. There’s Rosamund, daughter of the last queen, living inside a giant automaton, the price of immortality – a woman determined to piece together the state of the universe. There’s tales of love here – of a man driven to make unfortunate choices in an effort to protect the woman whom he loves, unaware of him as she is – and of loss, both social and personal. The protagonist of Folding Beijing lives at the edge of a world with fewer places in it for him, and gives us the perspective to see how the system within which he operates is not only unfair, but deliberately so. There’s a parable there, a social commentary – but there’s also a man trying to make a living, so that he can send his adopted daughter to kindergarten. The fusion of the fantastical and the human is as intrinsic to the characters as to the setting, broadly speaking – even when the human is, perhaps, the transhuman instead.

There’s different types of story on display here – the muted Year of the Rat is perhaps the one with the most straightforward action, odd as battling hordes of rats may seem. But there’s a contemplative strand running through all these works, something which made me stop and thing, as a reader, consider what symbols, what meanings the text wanted to convey. It was not, perhaps, an effortless read, but each story seemed to have something special about it, something that kept me turning the pages. This is a collection which is asking questions about people, about our place in the universe, and is trying to shape a response. The differing cultural context of the works may have suggested different answers, but the questions are, perhaps, universal – and in any event, the narratives they’ve constructed in looking around for answers were spot on.

At the end of the text are a series of essays on the nature of science fiction in China, and those provided an interesting background to the works themselves. They’re perhaps a little dry to pick through in one sitting, but there’s a lot of value there, and an energy, enthusiasm and determination coming off the page which provided a sense of hope.

In the end, this is a book filled with strange tales – and tales of the strange. It’s looking at old questions with new eyes, and posing some new and interesting questions I might not have considered on my own. It does so with narratives which intrigue and excite, and offers a valuable new perspective. It’s worth looking at, and will probably reward multiple readings.
Posted by Chris at 12:58 AM