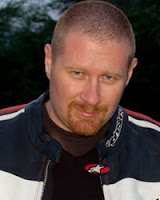 Something a little different today. As yesterday's post indicated, we've got an interview with Andy Remic, author of The Dragon Engine (among many others), which is out on September 1st. As you can see from the below, Andy has a lot of interesting and insightful things to say, despite my bumbling questioning (cheers Andy!).

Hi Andy – thanks for taking the time to talk to me.

I’d like to start with a fairly broad question – who, in your own words, is Andy Remic?

Andy Remic is an artificial construct sent from the future to inflict his particular unique brand of violent SF, fantasy and thriller writing on an unsuspecting public. The unsuspecting public are not quite sure what to do with him, but I suggest locking him in a big cage with tuna mayonnaise sandwiches, whiskey and a typewriter (and quietly letting him get on with it, or else he gets quite grumpy).
The Dragon Engine is focused on a party of experienced adventurers , with a lot of old loyalties and grudges; what inspired you to look at things from this fresh perspective?

In my previous novels, The Iron Wolves and The White Towers, the “band of adventurers” were a real nasty bunch, a deviant fistful of ne’er-do-wells, misfits and murderers. For The Dragon Engine I wanted a change of perspective – I wanted a band of noble heroes who then undergo, shall we say, nasty, life-changing experiences. When developing characters, I find conflict is great for driving forward characterisation, so to give the characters a rich history, as you say, with old loyalties and grudges, helps paint a much broader, richer world tapestry for the reader, and makes these guys more fun to write for the writer (i.e., me).
There’s  quite a large cast of characters throughout The Dragon Engine – do you have any particular favourites?

I love Beetrax and Lillith, and their particular unfolding relationship, and I especially love Skalg, First Cardinal of the Church of Hate. I can see him and Beetrax having an interesting future together.
·
Several of your ‘villains; in The Dragon Engine are conflicted, or have motivations which make them more sympathetic to the reader. Why did you take this path, rather than a more straightforward protagonist/antagonist set of relationships?

I’ve always particularly loved the William Munny character in Unforgiven, that concept of a bad guy who’s actually trying to be good – but deep down, he really isn’t. It painted such a realistic picture of how complex us humans really are, and made the audience actually root for the bad guy. I think that film was part of a characterisation learning curve for me – the fact that there really is no good and bad, just (ahem, fifty) shades of grey.

On the topic of characters – are any of them particularly difficult to write?

To be honest, I plan out each character, even secondary ones, and give them a detailed history – even if it’s not always relayed to the reader in the text. For me, it makes them much easier to write, and you end up instinctively knowing how they react in any given situation. So no, planning is the key here.

The setting of The Dragon Engine is clearly crafted with a great deal of care and affection – can you talk about the influences which led you to create these unique environments?

I’ve wanted to write something about dwarves for a long time now, and whilst I’ve recently enjoyed Jackson’s Hobbit movies, I found the dwarves a little too comedic at times. So when I started writing this, I thought, let’s make them a really nasty bunch. That then helped define the world in which they lived – an environment of pain, oppression and torture. And as for the world of our “heroes”, Vagandrak, it was already created for The Iron Wolves so it was a simple revisiting of the M word. (You know, shhh, maps).

There’s been discussion recently about ‘Grimdark’ and the evolution of the fantasy genre – what, for you, defines ‘fantasy’?

I’m quite a traditional fantasy reader, I enjoy heroes, battles, magic, dragons, all the usual stuff. However, I recognise how harsh these environments would really be. Imagine the Vikings, or the Greeks, those battles where you actually hit somebody in the face with a sword or axe. Ouch. Horrific! So yes, for me fantasy has evolved from The Hobbit to a more violent and realistic representation of a fantasy environment. I mean – hobbits. Come on? I should write The Hobbit 2 – Hobbit Assassins From Hell. (This is intended as a joke, Tolkien fans. I’m actually a big fan... [ducks]).

The Dragon Engine contains a great deal of action, alongside some excellent character scenes; which do you find the more difficult to write?

I love it all. Truly. I think with some of my earlier novels I was criticised for having maybe too much action, with not enough time for the reader to “breathe”... but I think I’ve now evolved an equilibrium which just becomes instinctive as one writes. I mean, this is now my, er, eighteenth novel. I hope I kinda know what I’m doing......

As a reader, what type of book do you enjoy – and what are you reading right now?

Oooh, this fits in well. I’m actually re-reading a very old favourite, The Demon Lord by Peter Morwood. I approached Mr Morwood to ask if he’d read The Dragon Engine and provide me with a quote. I explained how The Demon Lord was one of my favourite all-time novels, and how the demon, Issaqua, still gave me goose bumps. I pulled out the book to check the spelling of Issaqua, and just started reading it again. Very sportingly, Mr Morwood agreed! And he read it. And gave me a great cover quote! That was a thrilling moment, getting a cover quote from one of your own literary heroes.

Can you tell us a little bit about your average day/week as a writer?

I’m a part time teacher, so teach English to little monkeys a few days a week; the rest of the time is writing time where I cocoon myself in my book-lined study, light a few candles, pour myself a little tipple, and disappear into worlds of my own creation. The worlds become quite real to me, and I walk the mountains with the characters, living their adventures alongside them. And it really does become that immersive. It’s a bit like playing a video game – I’m in that world, guiding events. Around this I have a wife, two little boys, two Collie dogs, and an evil tomcat called Bruce – and I try my best to entertain them all.

As a follow up: some authors plan their novels in great detail before setting pen to paper; others seem to take a more seat-of-the pants approach. How would you describe yourself on that continuum?

I start off with a concept, then the designing of interesting characters, and setting out a broad outline of events. I write a synopsis and blurb. Then I usually plan the first half of the book, a paragraph per chapter. To do more is usually pointless because things change along the way during writing. So yes, I am a planner, but I also let my characters go where they please and change what they want. They tell me what to do!!

Have you found the rise of social media has had any impact on you as an author?

It enables you to be more in touch with fans of your books, which is cool, although I’m not a big fan of Twitter if I’m honest. It seems there’s a lot of pointlessness goes on there (me included, ha ha). I’m finding Instagram quite pleasant at the moment – except I followed Example, and the bugger lives on it. Not a day goes by without a hundred photos from Example. Example! Get a proper job!

What will we be seeing from you in the coming months?

I’m currently working on the follow-up to The Dragon Engine, called Twilight of the Dragons. I’m also working on three novellas for Tor US, A Song For No Man’s Land, Return of Souls and The Iron Beast, a dark, twisted fantasy set in the trenches of the First World War. And I also have an Iron Wolves short story in the fabulous fantasy anthology Legends II – Stories in Honour of David Gemmell, published by that great gent and author, Ian Whates at Newcon Press.

Finally – any words of advice for budding authors out there?

You really have to be persistent. It took me (and most other authors) years to get published. I didn’t know anybody in the industry, but finally acquired an agent, then my first deal in 2001 (Spiral came out 2003). Ultimately, you have to write because you love it. I’d still be writing even if I wasn’t published. Writing is escapism and exorcism.

Of course, nowadays there’s the self publishing route and some authors have been very successful that way. Budding authors have a lot more outlets nowadays, so good luck to you all!

Andy Remic is a British writer with a love of ancient warfare, mountain climbing and sword fighting. Once a member of the Army of Iron, he has since retired from a savage world of blood-oil magick and gnashing vachines, and works as an underworld smuggler of rare dog-gems in the seedy districts of Falanor. In his spare time, he writes out his fantastical adventures
Get closer to the mayhem at andyremic.com.