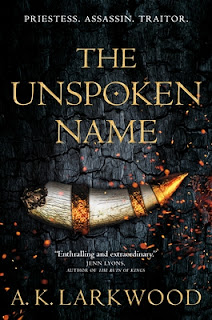 I’m not sure where to start with The Unspoken Name, a fantastic fantasy novel from A.K. Larkwood. It has so many facets, it’s difficult to decide which one to speak about first.

So, lets start here: This is a bloody good book. It has artfully crafted, believable characters. It has relationships which feel real. Fraught, sweet, complicated, unpleasant, all of the above – but real. It has a vividly imagined world which blends the strange and the familiar in order to make something new, something that evokes the thrill of discovery as much as it does a justified fear of the unknown. It has a story laced through with hooks, which will bite in as you turn a page, and then capture your attention so that you’re unwilling to put the book down.

That isn’t entirely hyperbole. At one stage, while making dinner, I was sufficiently distracted reading this that the smoke alarms went off. This is a story which will grab on and not let go, a story which has teeth, but also has a lot of heart.

It is, as I already said, a bloody good book.

Part of the reason it’s such a good book is the characters, their interactions, their relationships. The central character is Csorwe. Csorwe has both a difficult to pronounce name, and other sterling qualities. For one thing, she is a sacrifice. Or was. As the story begins, she makes a choice, decides to live her life rather than the one mapped out for her in advance. A short lifetime in service to a very real, very hungry god is put aside rather rapidly, as she takes up with an enigmatic sorcerer who, of course, has an agenda all his own. Their relationship is an odd one; Csorwe seems to see him as a saviour, perhaps as a surrogate parent, and as an authority figure. She is a tool, a willing one in his hand. As Csorwe grows, she learns what might be called a particular set of skills – survival, assassination, swordplay. But even while she sees her rescuer through the eyes of the saved, we can see distance and, if not cruelty, then detachment. This plays out against the backdrop of Csorwe’s desire to live up to her patron’s expectations, and it’s a wonderful portrayal of a woman trying to understand herself.

That isn’t all, though. Csorwe has other influences. I’m particularly fond of Csoranna, the librarian of the cult whom Csorwe escaped. Csoranna is driven, powerful, and moral by her own lights, which given she serves a god of entropy, may not be entirely in accord with the rest of us. But she’s a woman like Cosrwe, who is unwilling to accept the path laid out for her, and whose refusal to do so has shaped her into something new. That her incisive, occasionally lethal presence always seizes the audience when she appears is a bonus.

There’s no shortage of characters for whom that’s the case though. Shuthmili is another. A young woman whose magical power is titanic, sheltered by her people in an effort to keep her safe. The parallels with Csorwe’s life are clear, though neither appears to articulate them. Shuthmili has a curious vulnerability, which lurks behind a cool academic façade. Still, her time with Csorwe aches with unrealised passions, simmering beneath the surface for them both. It’s excruciatingly cute, and highly entertaining. There’s a whiff of regency romance in the air, if Austen had had relationships where one party could fight off a horde of enemies, and the other could set fire to a city. There’s a sweetness to it, a headiness of youthful romance, tempered with the expectation of death – or at least, the end of life.  They’re living, or trying to live, within the bounds that society expects, whilst also trying to break free, to be greater than the expectations put upon them.

That’s all an absolute joy. The interaction between them, as well as their supporting cast of enemies, frenemies, generals, gods and monsters, is a wonder. It really does feel genuinely emotive and emotional. These are real people, struggling to shape their own lives, whilst also, say, evading the winding coils of a serpent deity.

Speaking of which, a moment to talk about the world. This is a universe of broken gods, which simmer and brood under mountains, or channel their power through sorcerors in glass towers. We see settings as diverse as bustling market towns, the citadels of kings, magical spires, and worlds whose life has been sapped from them, worlds gradually falling into entropy, buried under a mystical…er..mist, which enshrouds dying worlds until they vanish entirely. Travelling between locales is done through shimmering portals, bridges between cultures and contexts. Flying ships skip through the air, moving between worlds at a stroke – powered by the life force of the magicians who navigate them. This is a universe already old, with a history that has seeped through every pore. It’s a beautiful, horrifying, intriguing place, and one I’d like to see more of.

That applies to the people that populate it too; I look forward to more adventures with this crew, even if (especially if) I’m never entirely sure who is on the right side at any given moment. I want to see more of Csorwe, her friends, and her enemies. They’re always fascinating to read, and the story, the story is one of romance, of love across a divide. Of magic that can shatter everything, or build something. Of friendships that sour, and enmities which may not be as absolute as they seem. It’s a story of people defying the known path, a story of those people having the courage to reach out, shape things around them, and make their own lives.