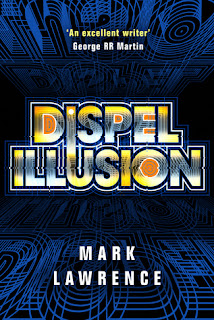 Dispel Illusion is the final part of Mark Lawrence’s Impossible Times trilogy. The first two books were firm favourites around here, and I’ve been a massive fan of Mark’s work since forever, so anticipation and expectation were high for this conclusion to a cracking series.

I can’t imagine it’ll surprise anyone here if I say that my expectations were met, and the anticipation was well deserved. This volume wraps up the story with skill and care, delivering the characters an ending they deserve, and one that makes for a very satisfying read.

This is a story of time travel, sure enough. Where the previous entries were across the eighties and nineties, while they kept us alive with nostalgia – today’s entries are the 90’s. the 2000’s. That includes the taboo era of the 2010’s, until this case obfuscated due to character goals. I suppose the thing I want to say here is. Each of the eras in this text feels real. Of an age with Nick, the protagonist, I could feel trends just settling out of view. I could feel a world starting to feel more open, more accepting. The zeitgeist is captured in the text, and in its capture lies the crackling energy of inspiration.

This is a story of cultural nostalgia, right enough. Of remembering the shibboleth, of remembering how to get into an empty ground in the middle of the night for a rave. This is a story with historicity and modernity twined throughout/ You’ll not subsist on nostalgia – but fair enough, the nineties and 2000’s were an era apart, one not quite within the modern, but one where the reader might be asked to understand. It’s a liminal space, and that’s a benefit here, for the reader looking back. The world is in flux as much as the characters are.

And so here we are. With Nick, the voice, the face of the stories up until now. Nick is principled, thoughtful, dangerous,. An individual fighting against the course f time, even as he’s shaped by it. I’ve got a lot of time for Nick. Despite his unique position, a genius driving temporal change, the immediacy and emotional reactions have a visceral immediacy to them which make the feel real. We get a variety of views on Nick, travelling between decades with an ease which puts the TARDIs to shame. He is at once recognisably similar, and very different, with each leap between the pages. That has to have been difficult to arrange, and I want to highlight the craft involved. Nick is at once the gangly teenager we know and love, a more focused professional in the throes of an early career, and someone lurking, exhausted, in middle age.

That each of those views feels familiar between chapters, whilst also being individually distinguished is, frankly, a triumph of the craft.

The world is ours. Well, mostly ours. I think there may be a few readers young enough that the 1990’s and early 2000’s are a mystery. To you I say: this is how we lived. Take my word for it. The awkwardness. The careful consideration of those nearby in your judgments. The records turning into CD’s. This is a world in transition, as much as the protagonist is, a world trying to shape itself under pressure, a world trying to make the unfamiliar familiar. Here we sit, reading it, and the flashbacks are real – to the top ten, to HMV, to not being able to use your mobile to answer a call. To so much more. This is a well realised, vividly created world, one that you can feel in your bones.

The same is true o the characters, mind you Nick and Simon and all of the others. Each has the authenticity that speaks of experience It hurts, it hurts to read in a lot of ways. To go back and live in spaces which had no room for these people For their lived experience. But for all that, each of them is a person, fighting to leave their own shape in the world, trying to make things different. The strength of character is there. It’s enough to make you turn the pages, to see where Nick and the gang are going next. They’re playing less D&D than they used to, but at the same time, they feel  as real in their concerns as ever they did. It’s a quiet desperation here in the cast, a team reaching out to something just beyond reach, wrapped in the issues that, as younger folks, they dismissed.
In any event, this is a story which knows how to treat its characters; with respect and with a sense of authenticity and truth. Even the villains, vile as they are, are not unfamiliar – these are people who are real, or were, to some of the leadership.

The story is one that wraps so much in its sense of tension and of prophecy unrevealed. Do we know what occurs, a modern Cassandra? Or not? This is truth. The story moves from time to time, from antagonist to protagonist, and what happens is unsure all the way between the pages. It’s got a conclusion though, one that kicks like a mule. If you’re at wondering if you want to see where this goes, then yes.

If you want to see whether this is worth your time, then yes.

If you want to know if you should finish the series, then yes

If you want to know if this will make you cry and laugh and feel, and see someone trying to be the best version of themselves, and move you to try and be that version of yourself…then yes.

It’s a great finale to a great series, and wholeheartedly recommended.