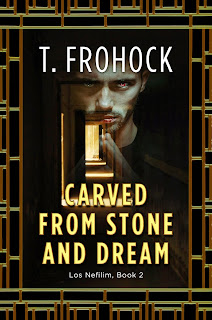 Carved from Stone and Dream is the fifth entry and the second full length novel in T. Frohock’s Los Nefilim universe. I’ve been a fan of Frohock’s work for ages, and have found the Los Nefilim series to be an absolute gem, filled with relatable characters with complex, believable relationships, within a vividly realised slice of history. So I was quite excited to get my hands on this one, albeit a little worried it wouldn’t live up to my expectations.

Fortunately, it met and exceeded them instead.

The story is set in the aftermath of the Spanish Civil War, as broken Republican forces and lines of non-combatant fall back toward France. And in France, we find our Nephilim. They’re the offspring of angels (or demons), individuals able to harness the power of the infernal and the divine to shape the mortal world. They feud and politick as much as anyone else, or perhaps more. It’s possible to see the Nephilim as a stand against a darkness most of us don’t know exists – though equally, one can argue that some of them are as much a part of that darkness as any angel, fallen or otherwise. In any event, the Nephilim and their struggles are deeply embedded in this world, influencing and influenced by its events.

Frohock has always been fantastic at worldbuilding, and that hasn’t changed here. The refugee camps for those on the road to Paris are believably appalling. Starving refugees crammed cheek-by-jowl. Turning on each other, turning on themselves, walking out into the sea on the border coast, leaving their worldly goods behind. This is the harrowing aftermath of appalling conflict, brought to life and brought home to the reader. The camps are real. The simmering tensions in the aftermath fo the conflict are real. The atrocities are real. You can turn the page with these people, feel the surf against your legs, look across the sand at weary, broken people trying to find a new home, a new life away from madness and the horror of war. This is a text which is unafraid to evocatively portray the spectre of war, and its consequences. It does so with haunting effectiveness.
Time is also spent in France, in a Paris not yet at war. The atmosphere is febrile, the air taut with truth unspoken. There is a certain joi de vivre though, standing in stark contrast to the horrors of the refugees. Still, even Paris is not a safe place; gangs are paid off, crimes committed, oaths taken. Sections of pre-war Paris are here drawn with an exacting precision, and the lush, evocative prose helps to bring Paris darkly to life. This is the post-war world, and if our characters are important to us, and to their own story, there are factions and factors seething away in the background which may yet change everything.

The other core component of the story is the characters. I want to give particular space to Diago and Rafael, whose relationship has formed the backbone of the series. It’s at the core of the story here, as well. Separated in the swift tides of conflict, their search for each other is fraught, and the emotions that are drawn forth are genuine, valid, and powerful. The way that both men lean on each other, trust each other, know they can depend on each other is a tonic. That they also have their own vices, their own struggles, that just makes them more real. This is their life, their romance, their relationship. The fear and dread of possible loss is there, but also the casual affection, the longing, the comfortable silences. These are men who complete each other, and the depicition of their love on the page continues to be beautifully, truthfully realised.

There are other types of relationship here of course. This is a story which wants to talk about family as much as it wants to talk about friendship, romance, or enmity. Watching Rafael and Diago trying to raise a son has always been as delightful as it is painful. Mistakes are made on all sides, but the struggle, the fact that everyone involved is trying, continues to be a delight, and gives their struggle both weight and emotional impact. Incidentally, it’s an absolute joy to follow their son through these pages, each instalment of the story bringing him a little closer to his family, and pushing him a little further away at the same time. In any event, this is a story which is thinking hard about families, about what ties them together and about what breaks those ties. It feels honest, raw, real. You can stand beside these men as they dig into the depths of their being, struggling to articulate their own truths – and that is both uplifting and humbling. It’s wonderfully done.

Oh, and there’s a story too. Did  I not mention that? Well, I won’t get into the details, because, of course, spoilers. But there’s a lot that goes on here, in a vibrant world, filled with characters who seem almost too real for the page. There’s betrayal, for sure There’s setbacks, and hurt. There’s blood and tears. But also close friendship, heroism, triumphs against all the odds. There’s secret plots, acts of terrible villainy, shocking revelations, and heart-wrenching heroism. There’s fast-paced action, beautifully crafted magic, and consequences which will grab hold of you and keep the pages turning long into the night.

Should you read this? Yes, yes, I think you should.