The Wisdom of Crowds - Joe Abercrombie 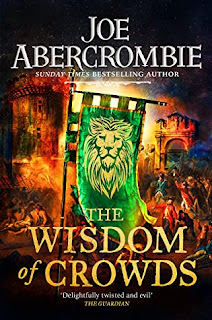 The Wisdom of Crowds is the finale of Joe Abercrombie’s Age of Madness series, set in his First Law universe. It’s probably worth mentioning a bit of history -this series works as a standalone, but its context is strongly informed by the other books in the existing universe.

Which is to say, this is a bloody good book, but a better one if you know some of the history. I wouldn’t start this book without at least reading the first two in the Age of Madness sequence, but I will say that those two are also bloody fantastic books.

Anyway! This is a story about what happens when The People, and I capitalise intentionally, are put in charge. It’s a story full of murder, mayhem, and living in the whirlwind of a sociopolitical disaster. It’s a story about the shifting centres of power, personal and institutional, and about how society is a dream we share and agree on - until we don’t. And then it all ends in fire and blood. In a seismic change, which may or may not actually be a change.

This is, not to give anything away, a clever book. It approaches big issues, like the idea of governance by consent, or concentration and dispersion of socio-political power, and explores them through the lens of characters operating at all levels of society. And those people, those people mean this is a book that isn’t a treatise, but at once a searing indictment of populism and more hierarchical systems of oppression and also a damn good story.

This is the part of the story where the wheels come off the wagon, which was already hurtling downhill at the metaphorical speed of sound. All the characters you know from the last two books are here: Rikke, now leader of a mostly unified North. King  Orso of the Union, rapidly finding that winning a battle doesn’t mean you get to rule entirely untroubled. Bayaz, that old trickster, more butcher than wizard indeed. Savine dan Glokta, wife of a rebel, now coming to terms with not being quitte as elegantly untouchable as she thought. Perhaps re-evaluating herself as well. And Vick, survivor of a camp for political prisoners, then a political enforcer, now trying to figure out whether she’s on the right side, along with Gunnar Broad, a man who keeps finding himself wading into violence, or perhaps just refraining from it despite himself. They’re a crew of hard cases, but for all that, they’re sometimes vulnerable and hurt and human., and here they find their old certainties swept away. If the previous book was one filled with quiet words in smoke filled rooms, this is what happens when the people in those rooms find out the smoke is there because the building is on fire. We’ve seen atrocities disguised as justice, and seen it be the only justice we’re going to get.

It is very hard to talk about this without spoilers, but I’ll say this: the word building, or rather, the slow motion collapse of a lot of things about the world we thought we knew, is top notch. It works. It gives us scared, angry, frightened people, with tools in their hands, and demonstrates what happens next. But it also asks how they got there, and isn’t afraid of the answers. From the dark, silent forests of the North, to the bloody, broken streets of the Union, there’s a vitality, a humanity, an energy that makes them feel alive. Not good, but alive.

And we’ve lived with the characters, eaten with them, seen people who say they’re good do terrible things. Seen terrible people do what they think are good things. They’re living and building and changing here, still. You may find sympathies shifting and loyalties changing in yourself as much as in the people you’re reading about. Everyone here is a hero in their own story, and I suspect that sometimes they’re their own villain, too. These are people - brilliant, confusing, broken, building, loving, laughing, hating and all the other things that people are. Nobody is all one thing, and from that, they come away feeling wonderfully real.