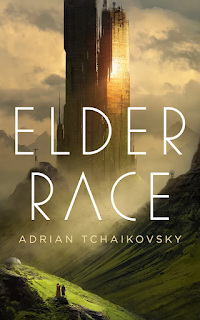 Elder Race is a sci-fi  novella from Adrian Tchaikovsky, who has recently been absolutely knocking it out of the park with high concept sci-fi which embraces the human factor. This story is, in that sense, no different. It’s smart, sometimes funny, and explores the human condition sympathetically, while asking some interesting questions. And, you know, also, it tells a heck of an adventure story, too.

The core of that story is Lynesse, and Nyr. Each is given alternating viewpoint chapters; which matters, because the social context, the way in which they see things, is so different.

Lynesse is the unlikely heroine of a fantasy story. She’s thetrailing daughter of the ruling house of a kingdom in the medieval mould, ruled by her mother, who has a will of iron and a thick streak of pragmatism. Lynesse is the wild daughter, the one paying out rope behind her as she prepares to leap over a cliff to see what’s at the bottom. But Lynesse is also the thoughtful one, the compassionate one. The one willing to do what needs to be done, fuelled by tales of ancestral heroism. Willing to stride out into the darkness, sword in hand, and master whatever monster is causing her kingdom grief. But she needs help And so Lynesse is going to find the last of the Elders, a powerful sorcerer, who could turn the tide, a mythical creature from a forgotten age, who promised aid to Lynesse’s family, should they ever call.

So she is going to call, and then go forth and righteously kick arse.

Nyr is, well, the last of the Elders, a powerful sorcerer, who could turn the tide, a mythical creature from a forgotten age, who promised aid to Lynesse’s family, should they ever call. Except..he isn’t. Nyr is a junior anthropologist from a space-faring earth, here to keep an eye on the development of this offshoot of humanity. But the rest of his team left centuries ago, and Nyr I s dipping in and out of stasis, spanning centuries in the blink of an eye, and getting worse and worse at the whole “non-interference” thing. Nur is fragile, depressed, living a loneliness that spans centuries, surviving on a cocktail of smart-drugs and an eroding sense of duty. He is not the hero that Lynesse wants. That said, he has access to satellite surveillance nets, orbital strikes, drones, ad a panoply of technological knowhow that would make your garden-variety sorcerer rather nervous.

I think what I like about the two is that they complement each other so well. Their different views describe the same thing in more-or less modern, more or less scientific terms. Demons of air and darkness are malfunctioning drones, cursed forests are laced with old radiation, and so on. The tale weaves wonderfully between the two, letting us have sword and sorcery and solid science fiction in the same few pages. And in both cases, the story works. Each character brings their own truth to the world, their own struggles – their self doubt, their depression are depicted with razor clarity, with empathy and understanding. They’re people, these two, as different as can be, but in holding each other up, and those they run across, they embody what makes humanity rise. They are enough alike that they too, can be heroes.

Anyway. No spoilers for the story, but it’s a journey of discovery, for both the characters in metaphor, and quite literally, as our team try to solve the mystery of what undermines Lynesse’s kingdom before it’s too late. And that story make me laugh, wrenched my heart, and damn sure kept me turning pages far too late in the night.

Which is to repeat myself; Tchaikovsky has crafted a gem here, something clever and human, a beautiful and compelling read. Give it a try!