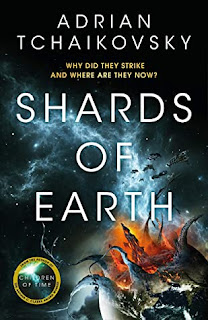 Shards of Earth is the latest sci-fi novel from Adrian Tchaikovsky. Tchaikovsky has written epic fantasy, and some of the best high-concept science fiction of recent years. I’ve been a fan of his work for years, and I tell you what: I went into this space opera with high expectations, and this one did not disappoint.

This is a post-war universe. A universe defined by a conflict which shattered worlds. Literally. Mysterious forces, seemingly beyond the ken of man, the enormous creatures known as Architects, appear above the skies of populated worlds, and render them into exotic, incomprehensible art. Of course, nobody survives the process. But this isn’t the story of war with the architects. This is the story of a world built on the ruins, Of a humanity whose home is shattered rock and outgassing air, which has rebuilt itself over several generations, whose scattered refugees are now living in (relative) peace. Of course, being people, they’re also busy running up factions, and politics, and internecine feuds. Not only between themselves, but with everyone else as well - from the Hivers, a self-aware nanite swarm, to the inscrutable mollusc Empire which circles the fringes of humanity, and tries to assimilate their worlds through persuasion and koans.Humanity is trying to come to terms with its own trauma, in a universe where it is not the dominant power, and where what is known is vastly smaller than whatever is at the edges of the map. The sense of scale, of vacuum as a vast, unknowable deep, held together by thin lines of force, accessible to a scattered few, the scope of the galaxy is wondrous and terrifying.

Into this uncaring universe step a ship full of miscreants and vagabonds. Perhaps the most central is Idris, the result of military experiments in the war generations ago, who can navigate his ship between the stars. Idris struggles with past trauma, the experiences which shaped him into a weapon, and the experience of war against the Architects. He’s a person on the edge, trying to get through each day, trying to find meaning and connection in a universe which is slowly forgetting the old heroes.

And then there’s Solace, a genetically engineered super soldier, a myrmidon who was decanted for war. Where Idris has lived the future, Solace has missed it, put on ice by her sister-warrior culture, to be brought back into the fight at need. Solace is dislocated, out of time, building new alliances and a new future with every word.

These two veterans, in and out of time, are embedded in a ship that skims the edge of the known, digging up salvage and secrets in equal measure. Their Captain is a voluble figure who thinks of himself as a father; they have a lawyer on board who is as much at home in a duelling circle as a courtroom, their engineer is ensconced in a life support system which also happens to be a giant scorpion combat exoskeleton. And those are the humans. I won’t even get into the aliens, but rest assured they’re a weird and wonderful bunch.The crew is a diverse, squabbling, complex organism filled with old and new grudges and quiet affections alongside public joys. It’s a ship filled with organic histories, where sense and story are heard in the quiet spaces between the words.

Which is all to say, the characterisation is top-notch. The people seem like people, in all their glory and horror, apes reaching for the stairs with one hand, flinging faeces with the other. The aliens, the non-humans, are strange and wonderful in different ways, which suggest perspectives just out of reach. And those aliens are people too. People we don’t really know, or understand a lot of the time, but still people themselves. And each is coming off the page, fully realised and whole.

The story? Well, I won’t spoil it. There are enough turns here for...a twisty-turny thing. There were moments when I turned the page in surprise, needing to see where a sudden revelation left the story. This is a soaring adventure, a found family investigating deep mysteries, with social relationships that give the fast-paced action a heart and depth. This is a fun story, a clever story, with some big questions woven through the narrative. The characters are intriguing and feel real; the universe is vast, filled with mystery and the scintillating shimmer of hidden treasure among the scattered remnants of ruined worlds. And the story is smart, and funny, and emotionally affecting, and has the kind of drive and energy which leaves you reading page after page late into the night - or early into the morning.

This is, in sum, a great space opera, and a joy to read. And you should read it!