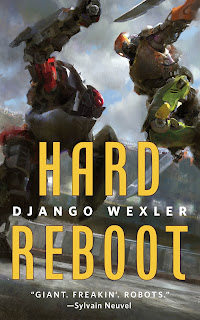 Hard Reboot is a new novella from Django Wexler. It’s a cracking piece of science fiction, which mixes some great characterisation with an interesting universe in the background, and also some kick-arse robot fights. It’s a lot of fun.

The story is split between two viewpoints; a scholar, visiting the shattered ruins of Earth in a distant future, and a scavenger whose life has been described within those same ruins. They both have different senses of presence, of voice. Kas comes to us from a space of privilege, aware of her own opportunities, and of the limits that have been forced on her by those further up the academic hierarchy, limiting her due to her ancestry. Kas is clever, thoughtful, and acutely aware that she’ll always be regarded as a second class citizen by her peers. Zhi, on the other hand, is fierce. She’s determined to rise above her position combing the ruins of Earth for usable remnants, and if her physical circumstances are brutal, still, nothing is there to stop her rising as far as she can. Well, except for the crime syndicate which wants her to work for them. I do love the differences in voice - Kas’s careful restraint, sens eof rising dread, and startling bravery. Zhi’s energy, drive, and fury at the circumstances she refuses to let define her.

The two have a chemistry together which is undeniable, and a pleasure to read. The dialogue between them flows naturally; the sparks that fly always threaten to start a more personal fire, and their passion and enthusiasm feel real. Like people living their lives, with passion and joy. Well, those and more than a little frustration, banter and joy. They’re good people. They’re people that you can come to care about in a very short period of time.

They do this, in part, due to the world they live in. The scattered remnants of Earth are quietly sad and the desperation of its inhabitants, abandoned by those that left them behind out in the stars - it’s real. Earth is a corpse of metal and blood, what remains of its economy driven by ghoulish sightseers and research visitors who see it as equal parts museum and zoo. But there are treasures there too, technological wonders buried under meters of steel and earth, things that in latter days of a star-spanning history, are outside our reach.

There are also, of course, the aforementioned giant robots. And I’ll be honest, they do fight. And their melee is kinetic and vicious and will drive up your adrenaline and keep you turning pages. Each blade scoring against armour plating, each metal fist crunching into a cockpit, carries the threat and promise of change. And it works on its own terms, but you’ll care because of Zhi and Kas, and their clash with both each other and the forces arrayed against the both of them.

In the end, this novella is a fun story, with fast-paced action, an interesting world, and characters that’ll make you care about them even more than giant robot gladiatorial games. Go and give it a read, you won’t regret it.