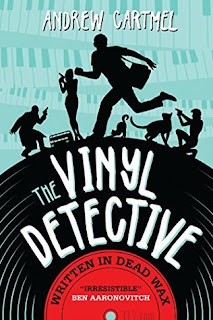 The Vinyl Detective is a mystery and a lifestyle all in one. The protagonist is a man interested in obscure jazz. And vinyl. Someone whose hobby has not consumed their life as much as become an integrated part of it. Someone for whom digging around in second hand bins at charity shops in search of that one elusive release with the limited run slip, or a B-side that nobody’s seen in thirty years.

It’s natural then to turn that hobby, that lifestyle, into a job. And Cartmel does that for us perfectly, with the eye of an expert. With affection, tinged with wry humour that shows that our interests are shaping us even as we define them. There’s a love here, a warmth for collectors and hobbyists of all kinds. In a lot of ways, the story is like a cup of hot tea on a cold winter evening. It leaves you with the same sense of contentment and satisfaction, and it fits around you like a well-fitting shoe, or washes off the page into the soul like, well, some particularly good Coltrane. There’s a mystery, and we can talk about that too, but the heart of this feels to me like a blend of domesticity and discovery. Of taking joy in the small things, in searching out that 1920’s vinyl you’ve never seen before, of finding hidden treasure between blank covers - and taking it home, and putting it on the player, just to see what it sounds like. There’s a quietly human transcendence to those moments, and so to this story, which captures them so well.

The story, well, that’s something else. Our nameless protagonist is approached by a mysterious woman, on behalf of an even more mysterious patron, to find a rare record. Why someone wants that particular record, and why they’re willing to pay quite so much to find it, is at least initially unclear. Things quickly spiral out of control, as our hero discovers that other parties are also in search of this record, and are prepared to do anything, including kill, to keep hold of it. And their own patron is of dubious reliability at best. But it’s a great adventure piece, which makes digging through record bins at flea markets into high adventure, and blends that prosaic joy with the simmering tension of a noir investigation, and the occasional explosion of gunfire. Over the course of the story, the central mystery unfurls, and its all, just, rather a lot of fun. While there are revelations, and while they can knock you for six and turn your head, they never feel unfair. The reader may be one step behind the protagonist, but they have as much of an opportunity to put all the pieces together. And all the pieces of the mystery lock together into a satisfying, cathartic conclusion.

In the end, this is a fun, cozy mystery with an innovative premise, which it uses well in service to a compelling story. If you dig this sort of thing, it’s going to be a good read.