The House of Styx - Derek Künsken 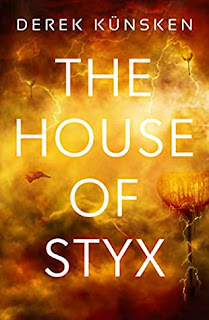 The House of Styx  is, at its core, a tale of family. It’s about the arguments which divide us, the shared moments which bind us together. The traits that we pick up from our parents, our siblings, our children. The ideals and the flaws that we pass on, or that we absorb through osmosis. It’s a story of one family, doing extraordinary things to survive, and maybe changing the world.

It’s also, and I can’t forget this, a story about Venus. Because that’s where our protagonists are, hanging in the cloud belts of Venus. Their bedraggled, run down, on-the-edge-of-perdition craft teeters from layer to layer, resource harvesting giving the means for a subsistence living, albeit one with at least the illusion of freedom.  Family is the narrative centre of the story, but the heart of it is Venus. Every decision, every moment, is shrouded in actions which the environment makes necessary. The howling acid storms leave each individual very alone against the night, and find families hunkered together in tight knit universes of their own construction. Each craft in this Venusian society, this colonial society, is surrounded by a world which is trying to kill them, and won’t even notice if it succeeds.

Künsken’s prose is evocative, and shapes a Venus which is wonderful and terrible in equal measure. The cloud layers are all different, and the Venusian surface is a sight rarely visible. Being on that surface, rarer still. With its hostility, its searing winds, crushing pressures and generally horrifying weather, it’s still somehow a place that feels alien and new. A stark and unknown sea, with desolation yes, but also a kind of stark and lethal beauty. This is a Venus which feels like an entity in itself, brought to life by Künsken’s vivid descriptions as we walk alongside some compelling characters.

And they’re an odd bunch, that’s a fact. Colonials, descendants of Qubequois, sent out to scrabble on the scraps of the solar system nobody wanted. The settlers in turn separated from the separatists, and now Venus is their own. And beneath both these layers of stubborn independence and anti-colonialism, live our family, whose choices decades before have doomed them to the margins of a marginal society. From the adolescent struggling with their identity, to the father so stubbornly ensconced in his own skin of old grudges, around to the elder siblings, living life in the shadow of their parents tragedies and choices, and around to the eldest, whose life was the hardest choice of all - they all have something about them. An essence, a humanity. So many weaknesses, and destructive tendencies, and rages and misunderstandings, yes. But also a love that is less transcendental than bred into the bone: family first, always. The family of deep diving Venusians speaks to us, and in its loyalty, in its bonds that creak across generations and across old wounds, it says that there is truth and honesty in love and family, and in not just the family you’re born to, but the family you find and grow yourself.

The story is...well, I won’t give it away! But it’s rather clever, a story of engineering, of getting around the towering depths of Venus. Of taking up that once chance you might have to change the world. And while doing that, trying to keep out from under the nose of a government who are, themselves, trying to keep out from under the nose of the Banks, who everyone must owe. It’s a science fiction story, in that it asks big questions about colonialism, and about gender, and about family, but it does so within the bounds of an imaginatively crafted world, where crafting poetry to shape the soul of Venus lives alongside the hard engineering problems needed to survive within its body. There’s something for everyone here - the romantic and the pragmatist married in one story; those here for the characterisation will be delighted by the protagonists, while those who love their world building will struggle to find anything as convincing as Künsken’s Venusian skies. And the story, well, it left me reading at 2AM, trying not to cry and determined both to finish the book, and that it couldn’t end this way, that I wanted more.

So I can recommend it in good conscience; it’s a marvellous book, and well worth your time.