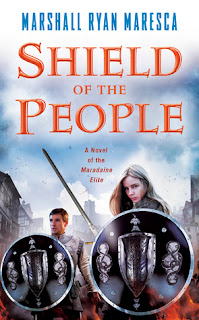 Marshall Ryan Maresca has brought us back to Maradaine with Shield Of The People. The city is the focal point for the various sub-series in his Maradaine saga, and each new entry has put a little more flesh onto the bones of the city, whist also being an absolutely cracking adventure. I’m happy to report that this is still the case. Shield of the People couples the deep, immersive worldbuilding I’ve come to expect from Maradaine books, with some whip-smart characterisation, and the sort of fast-paced action and snappy dialogue that’ll keep you turning pages long after nightfall.

This time we follow Dane, one of the leading lights of Maradaine’s Tarian order. The Tarians are a historical remnant, chivalric knights in a city coming to terms with an urban police force and standing armies. But they hold to chivalric virtues; loyalty, honour, protection of the weak. Dane is an unabashed narrative hero, a nice guy who kicks arse in the name of good causes and is always trying his best not to have to hurt anyone. I’ve got a lot of time for Dane, a character whose heroism is obvious to the reader (and indeed, everyone who isn’t Dane), but to which Dane himself is oblivious. His insecurities help define Dane as much as his exceptional actions; his struggle for perfection is wrapped in a fear of failure, a fear of not being good enough, and the costs being borne by others. Dane is also, to my reading, a man uncomfortable in the spotlight, especially as it’s been thrust upon him. We get to see more of that here, as he struggles to define a role for himself, in a city which wants him (and indeed the other Tarians) as a symbol, but isn’t entirely sure what to do with him otherwise. This search for purpose, wrapped in calls to action and in demanding success of himself, helps drive Dane toward feats of heroism. He is, as I say, a nice guy, and a genuine pleasure to read as he struggles with both abject villainy and, er, crowds.

In this he’s ably assisted by a marvellous supporting cast. Maresca has always had a knack of bringing even minor characters to life, and the magic is very much present here. Jerinne, for example. Jerinne is Dane’s right hand, a junior Tarian, and one with rather more of a tendency to make quick decisions and sort out any regrets later. She’s no less driven to succeed than Dane, a smart, successful young woman trying to put her mark on the world (and do the right thing). Her banter back and forth with Dane is a delight, and her clarity and sense of purpose  combine with intelligent, well-thought out dialogue in a unique voice to make her moments in the narrative thoroughly enjoyable.  I’m only skimming the surface here – the story is full of interesting people. They always seem like people, not one-note characters, and that helps keep Maradaine feeling alive.

Which it does. This time the focus is on upcoming elections, so we can see a city whose mood is becoming increasingly febrile as it waits to see who will be in charge and why. The neighbourhoods that the Tarians take us through all have their distinct flavours, and the struggles within them – for political recognition, for equal rights for women, or even for secession – carry the grounded weight of reality. These are living, breathing places with real problems and genuine conflict, not just backdrops for our heroes to strut upon. The neighbourhoods of Maradaine are all the better for their depth and the context they provide to the characters – each reinforcing the strenghth of the other.

If you’ve not read anything in the series before, it might be wise to go back to at least the start of this series for context – but overall I think this book still works as a standalone. That said if you’re a returning reader, this trip to Maradaine really is a fantastic adventure. It has the top-notch characterisation and complex, believable world we’ve come to know and love, backed up by a strongly realised and compelling narrative. Go get it – you won’t regret it.