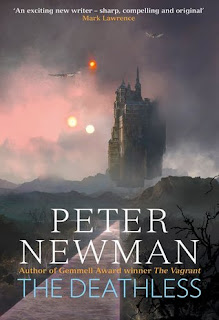 The Deathless is the start of a new fantasy series from Peter Newman, whose Vagrant trilogy has been very well received. The Deathless, though, is something else – bringing us  a new world, filled with unknown horrors and immortals on the edge of righteousness, exploring the price people are willing to pay for their goals, the bonds of family and friendship, and the way a society can be both more or less than it is thought to be.

The Deathless, you see, are the perfect aristocracy. Living in castles in the air, they justify their wealth, their extravagance, their very existence, by their ability to defeat The Wild. What is the Wild? It is horror. It is dark woods on a day full of spilled noonday sun. It is creeping horrors in the corner of your eye. It is monstrosities creeping behind you. It is transformation wished and unwished for, decisions made incorrectly. It is the risk taken and betrayed. But at a more immediate point, it’s a massive dark wood, filled with psychotic monsters whose most immediate goal in life is devouring people alive, at best.

The Wild, as the hostile environment surrounding and enveloping both flying castles and mystically warded roads, is wonderfully portrayed. Each breath is a gift, each step the suggestion of ominous intent. This is a place, a darkly shrouded wood, which see’s humanity ad an interloper, and is willing to reach out and cut throats before draining their blood into its roots. But it’s also corruption, a slow game. Because the strange creatures of the wilds will make details. Maybe they want your hair, or your fingernails, or your face, and maybe the dreams you have of murder can be quieted, perhaps your other goals assured. The wood knows. It scents desecration and draws it out, adding to its store of poison. And there is always a price. This is a space of madness and magic, where everything hinges on the knife-edge, on a gesture, on a word, on a decision made moments before.

The Wild is a horror, twisting and breaking the people seeking to drive it back with a road. And so the houses exist, in soaring castles, insulated from the horrors of those suffering below. But the castles do provide champions – armed and armoured, with the strength of ten and speed to match – and other magic besides – the immortals are the heads of houses fighting back the Wild/ Of course, being immortal, they have their own effect on society. Where immortality is a limited gift, it is covered – the book asks questions of worth (or otherwise) to see if our immortals should hold their thrones. Even as they murder the demon before them, there is the issue of hereditary right, the subversion of heredity and bloodline as a positive. Where these people fight demons, where they fight back the Wild, it is because it advances their own interests.  Which isn’t to say they aren’t glorious – angel-winged leading a hunt into the Wild, to defeat the existential threat to civilisation, one might think them civilised. But outside those castles are the poor and wretched and indigent, living this way to keep themselves alive. The book isn’t afraid to talk about The Wild, about the creeping horror, and the price of deals, but nor does it build a hagiography of those hacking back the roots. They have suffered and will continue to do so. But they continue to do so believable and we also see the vicious, focused, effective side of the house. Yes, they are immortal slavemasters, but they must protect their own – and if that own is not sufficiently noble, still they can be made so,

I suppose what I’m saying is, the world is a rich one, with layered interweaving of character and context. The sort of interconnection which makes characters see like people, and narratives feel real.

This is a rich, living world, albeit a horrifying one. The people within it slay demons, yes, they fight a creeping horror with their own hands and wake up at night screaming. There’s the politics of family and of immortality, of feudal obligation and enlightenment values, of blood as an oath and blood on the sword. This is a world to evoke wonder and horror, with characters whose very depth allows both sympathy and vilification. The story is there, sure enough, and heart-pumping, adrenaline soaked stuff it  is, too. This is a text which rewards closer reading, and also one which rewards reading at all.

Give it a try; it’s a smashing tale.