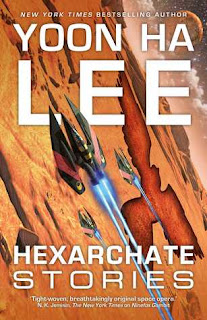 Hexarchate Stories is an anthology of tales from Yoon Ha Lee, set, as the title implies, in the Hexarchate universe that was made famous by Ninefox Gambit and its sequels. I was a big fan of the original trilogy of works, with its unexplainable super-technology driven by a mixture of ritualised torture, belief, and mathematics, and its searingly memorable characters. What I wasn’t sure of was whether an anthology was necessary, whether it would add something to the universe, whether it would tell us new things, add new perspectives, or just serve as an unnecessary addendum to a sequence which wrapped up on a high.

I’m happy to say that my fears were ill-founded, and that this is an absolutely cracking collection, which adds flavour to an already rich universe, and context to already vivid characters. If you’re coming here after enjoying the trilogy, wondering if you want to give this a shot – stop here, go and read it.

Structurally, this is an interesting collection. There’s a novella, a coda to The RevenantGun, which takes up the back half of the text. But before that are a diverse and fascinating sprinkling of short tales in the Hexarchate universe. They range from vignettes – lines of poetry and self examination – to character studies and full blown narratives, which manage to fit some serious weight of content into their short lengths. All the things I loved about the Hexarchate are in here. There’s the diverse, difficult, broken, argumentative, trusting, loving, emotionally valid cast, ranging from mathematically apologetic servitor bots through Kel before they got quite so uptight, all the way to Shuos with attitude problems. What they all have in common, these characters, is that their feelings matter, that their stories matter – that they stand out in sharp relief from the background, they seize your attention, they make you empathise with them, if not always sympathise. They’re living people, real people, and the stakes they play for are real too.

That the text can evoke as much emotional response from a few lines of delicate poetry and an action-packed, kinetic high tech brawl is…delightful. But know that when you pick it up, this is a text which comes to the reader from all angles, and doesn’t hold back from any of them.

I would perhaps sound a note of caution; it feels like a lot of these stories would land better if you were already steeped in the word of the Hexarchate; if you know about the travails of the Kel, delight in the games of the Shuos, have seen Jedao and Cheris work their way through three books trying to be better versions of themselves, and/or break or save the world. As vignettes, as stories, I think they still work in isolation – but there’s a connective tissue which informs these stories, and you might be missing out if you come to them before the trilogy – especially the final novella, which rather gives the game away for some of the larger trilogy if read first!

On the other hand, there are some delightful notes from the author scattered between stories, and a sense of wry whimsy permeates both these informative missives and the surrounding text. There’s love and lust and enmity and friendship on the page, and the people that feel those emotions will seem genuine and fragile and real. And what the stories say about the sprawling universe of the Hexarchate – well, it’s there in the undertones of poems, and the silent beats between words as the people on the page decide what they can say next.

These are good stories. Some will probably appeal more than others (and I suspect everyone who came out of The Revenant Gun hoping for more will want to dive into the novella), but it feels like there’s something for everyone here, and that the collection as a whole is a cohesive, thoughtful treatise not only on the Hexarchate, but on the human condition. If you’ve been wanting more of the Hexarchate, then this collection is a jewel, one you’ll want to pick up and examine closely, with more there the deeper into it you look.