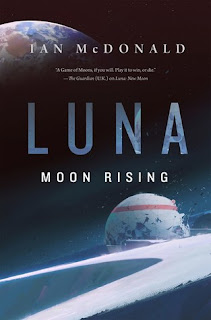 Luna: Moon Rising is the third in McDonald’s Luna trilogy. The first two stories, set on a moon where everything is for sale, even the law, were tightly plotted sci-fi thrillers, packed with byzantine politics and some genuinely heart-pumping action, alongside interesting big ideas. The conclusion of the trilogy has the same notes, but turned all the way up to eleven. The short version, before we get into it below, is that in a time when it seems difficult to end a series well, this one concludes pretty much perfectly. If you’ve been reading the series, you’ll want to see how it ends – it delivers on all the promises made by the earlier instalments.

Getting into the grit, then. As with previous books, this one largely takes place on the Moon. The Moon is a free place, in the sense that everything is up for sale, or at least for negotiation, including the law. Every citizen has their balance of credit, and that credit pays for air, for water, for a roof over their heads. Without credit, they’ll literally draw their last breath. Fiercely independent, this is a culture where everything is believed to be earned. At the same time, there are several key families which own most of the infrastructure for the moon – from orbital transport to mining equipment. Those families act in an almost feudal relationship to their clients, keeping people in jobs – and therefore food and air – in return for loyalty. Of course that loyalty is also negotiable.
But the Moon is going through changes, and we get to see that here. After a massacre removed most of the Corta family from play, their counterstroke has delivered them into high office on the Moon, even though the survivors are scattered. But their new victory comes at the price of increased interest from Earth in what’s going on above their heads. Corporations have arrived, with rules, regulations, and a different way of doing things. They’re rapacious predators in their own right, the wolf at the door, and they aim to change the face of the moon.

That clash of corporate cultures is something the story does well, giving us clashing viewpoints, and a sense of the cut-throat nature of corporate maneuverings, as the Earthers start trying to extract value from the moon, and the Corta family (and their allies) try to fend them off whilst also stabilising the Moon’s politics. It must be said that in this case, cut-throat can also be taken literally. Corporate assassination is a way of life, and these are people playing for high stakes. There are a lot of negotiations, a lot of words spoken softly carrying big decisions with blades sliding under them. That’s the Moon for you, this one anyway – sharp suits and sharper knives.

Speaking of Earthers, while they’re trying to get a foothold on the Moon, we do get to dip below the atmosphere, to keep an eye on Marina, Ariel Corta’s one-time bodyguard, who gave up on the Moon to go home, before the physiological changes wrought by Moon living became too great. The perspective allows us to see the social problems of Earth as well – the seething overcrowding, the decaying infrastructure, and the governments turning to blaming the Moon for the woes of their citizens. Exploring these systemic issues happens in the background, as our bodyguard struggles to reintegrate with her family and a society which views her as a traitor for leaving, and for coming back. The personal story, as with that of the families as a whole, has an honesty to it; McDonald’s characters are, as a whole, complex and thoughtful beings who appear more than able to step off the page at a moment’s notice.

If the vivid and intricate worldbuilding makes the book seem real, it’s the characters which really make it come alive. Lucas Corta, now Eagle of the Moon, and very aware that he’s riding the back of a tiger in the form of the Earth Corps, is at once ruthless and tender, a man doing the best he can for himself and his family, while also carrying around a grudge so large it has its own gravity well. At the same time as Lucas is consolidating power, we see Ariel, whose relationship with Marina grounded her in the previous books, exercise a razor mind to try and extricate the Moon, and her family, from the consequences of her brother’s plotting. They’re the centrepiece, a loving, bladed, broken relationship, the mechanism which kept the pages turning in my hands like a metronome. But they’re surrounded by a vast cast – the other Corta family members, and individuals from the other corporate families, whose own agendas have been simmering, coming to a head somewhat explosively over these pages – and changing the face of the moon forever. But again, the heart is in the characters – in the nuance, in the small gestures, in the callbacks to events in previous books. In sweet words and quiet murders.

It’s not all clandestine meetings in smoky back rooms and family drama, though. There’s enough fast-paced action here to keep anyone happy. Indeed, there are moments here which will leave you heart in mouth, waiting to see what happens next – and this is a book which isn’t afraid to give the catharsis you need, as consequences fall heavily across the board. We’ve seen the wind sown, and Moon Rising is the reaping of the whirlwind.

This is a great end to a fantastic series, filled with real, complicated, human people, in a society which lives and breathes, with a story which will grip you from start to finish. If you were wondering how the Luna series turned out, you should go out right now and pick up a copy of Luna: Moon Rising. You will not be disappointed.