A Time of Blood - John Gwynne 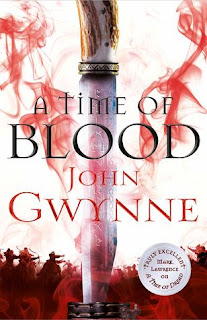 A Time of Blood is the second book in John Gwynne’s “Of Blood & Bone” epic fantasy series. The first, A Time of Dread, was fabulous: character driven, action-packed fantasy. So it’s fair to say that my expectations had set a pretty high bar for this book to clear. And clear it, it did. If you’re looking at this now, having read the first book, trying to decide if this sequel is worth buying, let me say this: Yes. And, in more detail: it has more of the things I loved about its predecessor. Snappy, kinetic, downright bloody fight scenes. Protagonists struggling with their own choices as well as the choices of those around them. Villains who manage to come across as people, even as they descend into monstrousness. And a world where towering citadels mix with tangled forests, and where the magic of blood meets the shield-wall. It is, in summary, wonderfully epic fantasy.

The characters are the heart of this story. I’ve got an especially  soft spot for Riv, the half-breed with self-control issues. Her entire world has been ripped asunder, and this book doesn’t really let up on that. Riv is trying, so hard, to build herself up, to hold on to the potential that others see in her. Her struggle to write a new identity for herself is a fraught one, and you can feel the raw emotion bubbling away within her. The conflict between a woman who desperately wants to do the right thing, and the desire to lash out and bring down a system which seems almost designed to keep that from happening – well, it’s felt viscerally on the page. That Riv also kicks serious arse is a plus – watching her learn and fight and fall and win, having got her hands dirty and rather bloody, is inspirational reading. There’s also a well-crafted and somewhat troubled romance rearing its head here – done in such a way that it feels genuine and an organic outgrowth of events, which is a delightful rarity.

Then there's Drem. I rather like our hero-protagonist, as he struggles to articulate who he is, what his feelings are, and tries to find a way to get the rich inner world he experiences out in front of anyone else. That’ s a raw, heartfelt struggle. Drem seems to spend a fair amount of time either on the run, or caught up in blood-soaked skirmishes. Watching his confidence surface through the text is great fun, and I was happy to be cheering him on from the sidelines. He’s still quiet and struggling with parts of himself, but definitely grows over the course of the text.

The character that sticks with me, though, oh that has to be Fritha. Once the woman Drem held a torch for, now the high priestess of the Kadoshim, whose penchant for murder and torture is not at all exaggerated. Fritha’s viewpoint is some interesting emotional geography. She’s holding tight to a savage emotional wound, and that allows us to feel empathetic toward her excision of that pain, even when doing so leads to utter ruin for our heroes. Fritha is smart, driven, and focused. She also is more than capable of doing absolutely terrible things in service to her goals, and the story doesn’t flinch away from showing us that. This delving into the mind of the villain is masterfully done. Even as I recoiled from her, I could see how Fritha had started down her particularly unpleasant road, and what the price of that had been .Every time she showed up on the page was a tense mix of delight and burgeoning horror; as an antagonist, she’s complex, believable and makes compelling reading.

I talked a lot about the world of this series when reviewing the previous book. Suffice to say, there’s more here of what I loved then. The soaring fortresses of the giants are stunningly realised. The forests that our protagonists tramp through are dark, mysterious and teeming with life. The crunch of feet on the deep snows of the Desolation feels crisp, and you can almost feel the icy wind on your face as you turn the page.  The environment is rich, detailed, and comes alive in your hands.

There’s politics here, too, the world of people to go alongside the natural. And my, there’s so much scheming going on. I mean, the Kadoshim are fallen servants of the divine. They’re often monstrous, but have surprising moments of vulnerability. Their schemes tend to be a bit more focused, and the monsters that they put into play are both repellent and magnetic. The Ben-Elim, though, the eternal enemies of the Kadoshim; they’re an odd lot. Convinced of their own superiority as guardians of humanity, they have a penchant for heavy-handed arrogance which makes them unsympathetic at best. If humanity are on both sides of this war, it’s worth noting that even the ‘good’ Ben-Elim are not often nice people. They have, it seems, just as much a capacity for treachery, realpolitik and deceit as anyone else, and possibly more, having wrapped themselves up in a tale of their own effortless superiority which…may not exactly be borne out. Though the Kadoshim are definitely the baddies (oh my yes), they come by it honestly. The Ben-Elim claim to be on the side of right, but that doesn’t make them automatically possessed of virtue. Often quite the opposite. You can see in every word they speak the incalculable arrogance which suggests that the war they’ve found themselves in is of their own making.

Anyway.  You’ve come this far. You’ve read the excellent A Time of Dread, and you want to know if you should read the sequel.

Yes. Yes you should.

It’s got everything you loved about the first book – be it the bloody, close-quarter, no-holds barred fight scenes, the fast-paced, tense plotting, the detailed world building, or the complex characterisation. But more. Yes. More. This book takes everything from its predecessor and turns it up to eleven.

I can’t wait to see where John Gwynne takes us next.