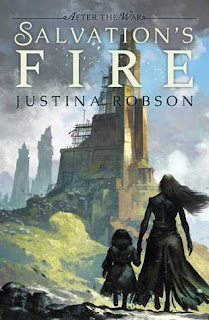 Salvation’s Fire: After The War is the second book in the ‘After the War’ universe; the first, by Adrian Tchaikovsky, having come out earlier this year. This book follows on from the events of the first, but it can be read as a standalone – though you may lose some useful context by doing so.

This is the world after the end. After a dark threat has arisen, raised its armies and broken them against heroes. After the darkness has seeped in and poisoned the soil After the darkness has killed the Gods. After it has shaped a new world, one which necessitates co-operation and incentivises action. The great villain drew peoples together even as he broke them. In their shattering, they recombine into a stronger whole. And this book is part of that process. The war is over, that’s for sure. But remnants of the past are difficult to shift.

There’s a sense here of spaces in recovery. Things are quieter, perhaps, than previous. Though there are still the poor, the destitute, the wandering remnants of armies, these things are less visible than before, though still a factor. This is also a world coming to terms with a lack of religion; in a space where the gods have been active and real, and where their servants and avatars have been embedded in the day to day, life without them is a complex, difficult, damaging work in progress.

We wander forests – only some of which are on fire – and seas here. There’s the opportunity to catch up with several cultures, and delve into the harrowing depths of the broken citadel of the enemy. The description is tightly written, giving enough detail to set the reader’s imagination to filling in the blank spaces. It avoids baroque prose and gives out what it needs you to know, and invites you to fill in the remainder. This builds a living, breathing world from the struts of the narrative – though yours may look different to mine, they carry the same story. The world breathes, its denizens living, suffering, hopeful creatures, its locales a smorgasbord for the imagination.

What I’m saying is, if you came here from the first book in the series, the world will feel familiar, but with enough differences to make you sit up and take notice. If this is your first step into this space, then I’ll say this: the depth and complexity of the world on display is impressive.

This is more of an ensemble piece than the last book. Though there are some old favourites, there’s enough new people around to keep us guessing. Celestine, slayer of evils, whose search for redemption defines much of the series so far, is still here. She’s still tired, still questioning herself, and still unwilling to take any crap from any of the various gods, monsters and everyday idiots that cross her path. Celestine kicks arse, in between worrying about what she’s doing and why – which makes her feel rather human, in her competences and her doubts.

There’s a focus here on Kula, one of the newer members of the group; a girl who has very little, and now has to decide exactly what she wants. Watching the other members of the team – demi-gods, old monsters and struggling heroes all – try to interact with a young girl is a delight, exposing as it does some of their own troubles, and the darker secrets beneath the personalities they put out for public consumption. Kula is thoughtful, strange and frightened, and those attitudes seep off the page as you turn the pages – and as her understanding of her purpose and that of the team grows, sodoes yours.

At heart this is a character piece webbed into an ensemble adventure. Fortunately the characters are convincing, crafted with a precision which leaves them stepping off the page to pick up a snack and ask when youre getting to the next chapter. As an ensemble, they work well together, the conflicts and bickering keeping the wheels going, and a sense of deeper issues acting as a shadow over the lighter moments.

Another new arrival carries a wonderful dichotomy about them – in things they have done, actions performed, regrets created. Yet they live and laugh and love with an energy and passion which belies that quieter emotional flow beneath. I won’t go into details for fear of spoilers, but rest assured – these are people, and their struggles and triumphs, losses and hopes will compel you to find out what they do next, and what choices they make.

The plot – well, I won’t spoil it. But I’ll say this. It has moments which are truly epic, struggles which are also spectacle. It has moments of heart-rending sorrow, of people making appalling, difficult choices. It has some wonderfully dry wit in the dialogue, which made me chuckle, and some sting that made me bleed as I turned the page. It’s got individual stories, moments of personal growth and suffering which show us individuals shaping themselves, and it has explosions of magicn and power which (also) shape worlds.

This is a clever, vivid, cunningly crafted work of fantasy, one which moves from the personal to the epic and back with swift, assured prose. It’s a good story, and one which will make you think in between seeing what happens next. Give it a try.