The Secret Barrister: Stories of the Law and How It’s Broken - Anonymous 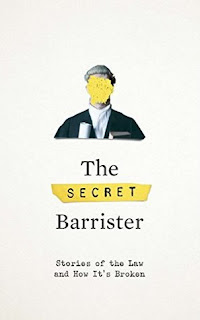 This isn't our usual fare over here on SF&F Reviews, but it was such a powerful, interesting read that I thought we'd talk about it.

The Secret Barrister: Stories of the Law and How It’s Broken is a book based on the blog by the eponymous (and anonymous) Secret Barrister. It explores every aspect of the system of law in Britain, from arrest through trial and sentencing, and  explores the roles of key actors in that system, such as solicitors, judges, magistrates, barristers, police officers et al., as well as organisations like the CPS. If you’ve ever wanted to know key differences between US and UK law when switching between Law & Order reruns and episodes of Broadchurch, this is the book for you. If you’ve ever wanted to know how the British justice system works – or if it works at all – this is also the book for you.

Full disclosure: This book made me very, very angry, which I suspect is one of its goals. It’s difficult to read about the system of justice failing and being failed as comprehensively as the text presents it and not get angry. The text forensically dissects every aspect of British justice, and while it’s willing to say where things are done well, it’s also incredibly scathing where things are not. And it turns out that there are quite a few cases where that’s the case.

But why does this work? Why do the stories here have such an impact? I think part of it is the style.
This isn’t an impenetrable legal textbook, filled with scattered Latin phrases and a load of assumed knowledge. It’s in a chatty vernacular breezy and accessible to anyone, even – or perhaps especially – those of us with no legal training. That accessibility is a triumph; I imagine making the state of law and justice to the layman is a difficult thing to achieve. But it’s backed up by a passion in the words, an enthusiasm and sense of care which is evident in the prose even as it erupts off of the page. The author wants the reader to understand the system, to be sure – but that’s only part of the goal. Another part is that they understand why that system is important, and what the issues with it are.

In that, the text is a magnificent success. Its explorations of the system are erudite, the slings and arrows it hurls at that system precise as well as heavily barbed. There’s a sense here passing from author to reader that the British have one of the greatest justice systems in the world, if only we’d look after it properly. The personal stories – of cases abandoned or perversely decided due to spending cuts, of triumphs of law over common-sense, of everyday chaos wrought by those trying their best in an overloaded, underfunded world – give a sense of the immediate, and wrap the larger legal perspective up in something unafraid to show the consequences of that perspective on actual people.

This is an elegant, eloquent book, which serves as both a primer for understanding a system which sits in the background for the entirety of most people’s lives, but also carries a fiery passion and indignation at the way in which that system is being slowly dismembered, or failed by lack of funding, and a similar enthusiasm for its successes in spite of those flaws.  There’s an energy thrumming through the pages, an inherent decency and sense of urgency which makes each page at once a refreshingly intelligent exploration of complex problems, and a hard shot of cunning crafted sizzling rhetoric about how those problems are being ignored.

Should you read it? If you’ve ever wanted to know how the justice system works, in theory and in harder, grimier reality, yes. If you want to see the sparkle of an institution with potential, and the stark anger at the way in which that potential is wasted, yes. If you want to see how we can and should change things for the better, then yes. It’s an absolute barn-stormer of a book, one which will benefit multiple reasons, and inspire anger and hope in equal measure. Find a copy, buy a copy, read a copy. If nothing else, it’s likely to make you think, and that is some high praise indeed.