Death Of A Clone - Alex Thomson 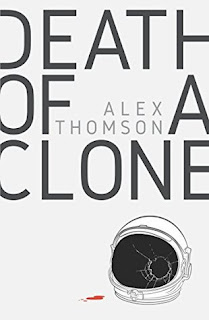 Death Of A Clone is the debut from Alex Thomson; it’s a rarity – a nuanced science-fiction story, with a weather eye fixed on the traditions of the ‘cozy’ mystery genre. It blends the patterns of Poirot and Marple with thoughtful questions about humanity and its future.

The location for all of this is Hell. Well, not literally, but close enough. Hell is the name of an asteroid plummeting through the edges of the outer solar system. It’s cold, dark, and lacks an atmosphere. It is not, to put it mildly, a fun place. It does, however, have one thing going for it – it’s rich in metals. A mining crew is settled on the asteroid, their lives defined by a rota, which tells them who should be where and when in order to meet their quota. They’re isolated in the tumbling black…and they’re all clones.

The clones exist in ‘families’, each with a defined role. Some do the heavy lifting. Others the sorting and classification of ore. Others do more agile work. Each family carries traits – be they stolidity and a certain refusal to rock the boat, or a wry cynicism – Within the families, they’re aware of each other, but telling each identical member from the others is something of a task. The clone families are also not the only people on Hell. They’re supervised by three men, who are not clones themselves. These Overseer’s are responsible for production, for maintaining the velocity of their work crews. This is a closed system, and its also an emotional hothouse. The authority of an Overseer is backed by weaponry, and by the promise that after enough time has passed, everyone on the rock will get to go back to Earth – a home that none of the clones have ever seen.

There’s issues here around identity and power, of course. The Overseers carry nominal authority, but are significantly outmanned by the clones which they oversee. The clones, in turn, fight to meet their mining quota in the pursuit of a dream – as the alternative is an eternity on a desolate rock. In this instance, Hell is both a desolate rock and other people. Because the interpersonal dynamics of the clone families are always shifting; certain families are engineered to be attacted to the others, and there’s a question here of volition, of the amount that genetics make up reasoning, and on how far outside the bounds people are willing to push themselves.

On which note: whilst Hell is a wonderfully realised backdrop, a stark wasteland which carries horror in its very prosaic drudgery, it’s the characters which steal the show. Well, one, anyway. Leila is our protagonist, one of a pair remaining from a clone family cut short by accident. What she knows is life on Hell, but what she dreams of is Earth – an Earth spoken of in stories from an Overseer’s books – of village greens, red post-boxes, and murders which get solved in time for tea. Leila is sympathetic; she’s prone to self-examination, and in looking at herself and others, we see the collective power structure which persists – the clones working under their overseers, the overseers constrained by the number of clones and the necessity of meeting a quota. But we also see the relationships binding Hell together, and Leila’s eyes let us see the simmering feuds and resentments which are quietly frothing under longstanding social norms. How one group doesn’t trust another not to cause trouble. How one group keeps to themselves, with accusations of a hidden agenda. How the Overseers are flawed individuals – not authority figures as much as men given authority and let loose.  Hell is a pressure cooker, and the story draws out these pressures, throws them under a light, and lets us explore them – but with the awareness that more are hidden away, still, that there are currents which have yet to be fully explored.

Given that the clones are meant to be identical, it’ delightful that each we see in detail has such a unique voice; Leila in particular is incisive, introspective, and prepared to make hard decisions in pursuit of truth. Her contrast to the bullish members of one ‘family’ and the manipulations of another is stark, but clean – these are people, the text declaims. Even if they’re stamped out of a die, their individuality, their struggle, is unique and to be appreciated. This is true from the simplest – those who try and break up their similarities with props or facial hair – to the more complex, those who keep their individuality locked within their emotional core.

In any event, each of the clones and their three overseers lives, truly; and in plumbing the depths of mystery, we get to know a great deal more about many of them. I was delighted by the delicate, complex power dynamics of the story, something which works because each of the characters we’re shown has something different about them, an individuality at conflict with the bald faced dehumanisation of cloning. In any event, these are well-drawn, complex, humanised characters – and ones for whom I felt, by the end, a full measure of empathy and sympathy.

The plot – well, more than usual, that would be telling. It is, not to give anything away, a murder mystery. That said, it both appropriates and subverts the tropes one might expect from that, gleefully playing into the comparisons with Christie whilst keeping a stream of fresh ideas running through.

The clues are there. The body is there. Thecriminal? Also there. Hell is a very, very large locked room, which challenges us to think in terms of means, motive and opportunity. It has enough red herrings to keep you guessing, and enough complexity and truth within it to make revelations a delight. But it’s not just a whodunit – though it is a good one. This is also a sci-fi story, and if it explores a murder, it does so through a lens of power, of agency, and of a future where individuality may be suppressed, but not denied. There’s enough mystery here to keep you turning pages, and enough pathos and other emotional weight to make you feel each revelation like a kick in the gut.

This is a story which has power, I say. One which will explore the best and worst of what we have within us, and wrings out its reader emotionally whilst showing that to them. It’s clever, both in the stories it hides, and the story it tells – a multi-faceted jewel in the literary ore. If you’re looking for something new, something which will challenge you to think, and also challenge the way in which you think, this one’s for you. I’s a page turner, one which will keep you up into the night – but also a story which wants to ask the big questions, then waits to see what your answers are. Give it a try.