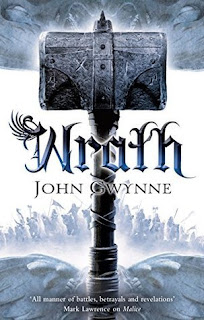 So, lets talk about Wrath. Wrath is the last in a series of doorstop fantasy novels by John Gwynne. I’m a bit late to the party on this series, having picked the first one up relatively recently – but it’s impressed me with a combination of subtle politics, genuine and complex personal dynamics, and, well, rather a lot of blood.

Each of the books has compounded on these themes, giving us a complex world, one where the alliances always felt fragile, and where hidden agendas always set the board for later betrayal. The nations of men have had a long history of greed, cruelty and turning on each other. Thematically, there’s always been an issue of individual good versus the larger, “greater good” as well. I think broadly the narrative backs the idea that the larger good can be compromised too easily, in that the desire to achieve it leads to self-justifying evil. That said, it’s also been a theme of the series – which continues in Wrath – that nobody thinks that they are the villain of the piece. If there is an army of darkness, and an army of light, then it’s still possible for each of the participants to argue that they are the latter. There’s a certain moral ambiguity, a sense of grey areas floating around the characters, even now.

That said, as the series moves toward a conclusion, there’s a sense of imminent closure. Some of my favourite characters finally met up, and I can’t say the meetings all went the way I’d thought they would. In some cases, there was well, rather a lot of blood. Wrath certainly doesn’t pull any punches – there’s more than one unexpected or well deserved demise, and I have to admit, some of them came with an emotional weight that hit like a blacksmiths hammer. Wrath is a book unflinching in its endings, and it shows, in the terse descriptive prose, in the decisions characters make, not expecting to survive, and in the brutal, final-feeling battles.

Speaking of the battles – the series has always waded in gore, though served appropriately. That’s still the case here. The combat is grim, daunting, and explicit – and that combination is what makes it feel real. You can feel the crunch of a war hammer against armour, the thundering synchronised march of a shield wall, the screams of the dying, and the silence of the dead. There’s a raw energy to the fighting as well, our viewpoints surging around the contesting armies, the individual combats given detail and room to grow – tension in duels so thick that the swords seem to cut through it.
The fighting is tied up with the character development; our protagonists seem to be settling into themselves, becoming, if not any more or less sure of their agendas, at least accepting of their positions. We’ve watched them grow and change, scarred by events and broken by the deaths of family and friends – and now they’re familiar, but different, even as they square off to end each other’s lives.

In the end, Wrath promises a great deal, and it delivers. The writing is smooth and draws out tension, leaving you turning page after page to see what happens next. The characters are those we’ve invested so much time in over the course of the series, and seeing their endings – or new beginnings – is heart-wrenching and bloody marvellous at once. The overarching plot, the epic war, the end of all things – well, Wrath wraps all this up with a bang. I’d say if you’re looking for a new series to try, one which approaches traditional fantasy tropes, and polishes them until they shine, then going back and starting with Malice is probably a good choice. If you’ve been on this ride for a while, and are wondering if it’s worth picking the book up to see how it comes out – then I can say yes, absolutely, this one’s worth the time.
Posted by Chris at 12:00 AM