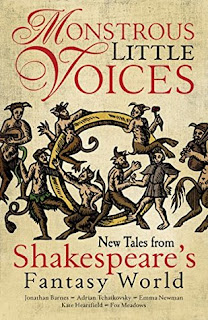 Monstrous Little Voices is a collection of fantasy stories set in the fictional world of Shakespeare, with a meta-narrative bonding the short stories together.

The world will be familiar to anyone who has read (or was forced to read) a bit of Shakespeare at school. All the stories are written within the Shakesperean period, and with a similar style. There’s not a lot of thee-ing and thou-ing to make things difficult, but the lyrical mode of speech, for example, is quite present. This isn’t just the past, though – it’s an imagined version of the past. In particular, the faeries and cursed princes of Shakespeare’s works are all too real. The Faerie courts hold sway over realms hovering on the fringes of reality, and are prepared to stick their noses into worldly business. Witches roam at the edges of humanity, making prophecies and generally stirring up trouble. And ghosts walk the earth, armed, armoured, and sometimes exceptionally lethal.  It’s a world of the fantastic, the phantasmagoric – a world which Shakespeare created, and the contributors to this collection

The characters – well, they obviously vary depending on the writer in this shared world. It’s worth noting that some characters persist between stories, and the authors have managed to make their characters persist with them. It’s difficult to single out especially well drawn characters, but I particularly liked Foz Meadows’ flashbacks to The Tempest – showing us a tormented Prospero with a dark edge, and a Miranda who is an active participant in her own destiny. Both feel like the flawed aspects of humanity they aim to be. Similarly, Jonathan Barnes’s Macbeth is terrifying – an elemental force of rage and distate; however, Barnes finds a quiet locus of solemnity at the centre of the character maelstrom, making a gross harbinger feel at least a little human.  Across the stories in this collection, the main characters are well presented – growing out from their theatrical guises, rather than being defined by them. There’s a great many recognisable individuals here – Viola, Parolles, Orsino, and so on. Each will be familiar to students of Shakespeare, but works quite plausibly for those of us that are not.

The plots – well, not to spoil things, but each story in the collection is self contained, though actions from each may make their consequences known in the next. There’s a good deal of variation, from Foz Meadows’s complex story of family, through stories of love and duty, and into Barnes’ climax. Each serves a different need in the dramatic structure, but each is equally compelling. Picking up the book, I could read each story out of order, and each one was sufficiently engaging to keep me turning pages. Taken together, they were a narrative gestalt – greater than the sum of their parts.


Is it worth reading? If you’re a fan of Shakespeare, with a  hankering for an expanded universe, absolutely. Some segments may offend the literary sensibilities, but it’s largely compulsive and intriguing reading. If you’re not much of a fan of the bard – don’t worry. Each piece of work opens on a world of fae, of compacts, of magic and blood, and affection spurned and love embraced. You don’t have to be a Shakesperean to enjoy the new worlds thrown open by this text. I’d say the stories within the volume are each highly enjoyable on their own, and especially so taken together – so yes, worth the read.
Posted by Chris at 12:00 AM