A Gamble of Gods - Mitriel Faywood 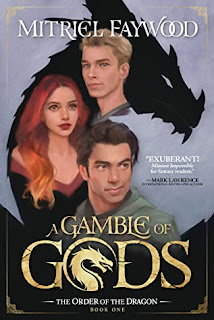 Full disclosure, the author asked me to read this one. But, if I'm honest, I probably would have anyway, because it combines a few things I really enjoy, and blends them up in a superlative package. There's the quick-witted, fast-mouthed swordsman, whose capacity to get into scrapes is matched only by his apparent skill at getting out of them. And the pensive, repressed scholar from a place where science has long since taken the role of magic, moving between worlds with hardly a thought, but torn from his place in the how and why of things, set adrift on the tides of circumstance. And the lady, mysterious, who walks beside them both, her internal struggles as fraught as those fought with sword and laser, carrying a power she doesn't entirely understand, and feelings she'll struggle to control.

This is A Gamble of Gods, and it's an absolute stormer of a debut, a charming, thrilling mix of science fiction and fantasy, where secret societies are running the universe behind the scenes, where a generations old conspiracy is unfolding, and where necromancy is as real, and as lethal, as a blaster bolt to the chest. But, to be up front about it, this isn't a po-faced text, filled with dour warnings and po-faced protagonists. It's a book filled with a rambunctious energy, a wry self-knowledge, and moments of on-the nose humour that made me laugh out loud more than once. It's a book which isn't afraid to dig into the emotional availability of its cast, to explore who they are, and why, and what they want; there's romance woven between the self-revelations and swordfights, the kind that balances teasing and the gentleness of emotional understanding with a soupcon of raw desire and fierce passion.

This is a book which isn't afraid to wear its heart on its sleeve, and I kind of love it for that.

It's also a book with a hell of a lot going on. It's spread across three main characters, and at least that many locations, including, well, London. The contemporary, British London that is, not some sort of future London in the clouds. And I'll say this, Faywood makes her London come alive. The streets are just the right kind of grey and misty, you can feel the edge of that damp cold coming into your bones as you trudge up Euston road to the office, hoping to stop at Pret for a coffee. The people have the same kind of fire and honesty and fragile bravery that you see every day at house parties and restaurant gatherings in the city. The world lives, and that's something of an accomplishment, because making somewhere that is real feel real on the page is something of a challenge. But London is joined by more exotic locales, never fear. The dark forests and palace politics, the witch-ridden geography, filled with old, deadly magics, is there too. And it feels just as plausible, just as real. And so does the purported utopia of SCIENCE(!), filled with dodgy characters of every description, whose motives are unclear and often downright Machiavellian, but who can put nanoprobes in the air, siphon data from anything, or build you an invisibility cloak. And some of them are the good guys. Maybe. Probably.

Anyway. It's a story which is at once deadly serious, and doesn't take itself too seriously. A story which lets its characters have fun, and is fun, while also being an entertaining read, and one which kept me turning pages later into the night than I care to admit. And will probably do the same for you. Definitely worth a look!