Born For Trouble: The Further Adventures of Hap and Leonard - Joe. R. Lansdale 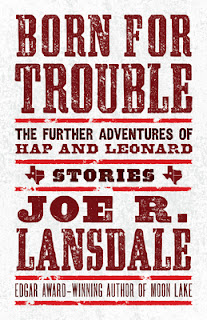 Born for Trouble is a collection of novellae and short stories in the universe of Hap and Leonard, issued from the pen of the prolific and always hugely entertaining Joe. R. Lansdale. Those of you who follow this blog on the regular will know that I’ve been a big fan of Hap and Leonard, and their various misadventures, for years. Getting another slice of East Texas mayhem and found-family affection is always a treat. And so it proves here!

I will say that if you’re a fan of the series, this is likely going to hit the spot for you. A newcomer will find it accessible and entertaining too, but might be advised to dig into the larger series as well. But either way, the crux of the thing: what is it, is it well written, do I want to spend money on it?

Lets start at the end. Yes. If you’re looking for more Hap & Leonard, this is going to meet your needs. Opening it up and reading through the stories, filled with warm banter, cold violence and a sense of place that you can feel in your bones…well. It’s like slipping into a pair of comfortable old shoes, which…may also happen to be a little bloodstained.

The stories themselves are, well, delightful, in the way they blend the weird and the prosaic. The way they bring to life a Texan swamp jungle in one breath, filled with predatory animals and people, and in the next ask us to consider the mundane, intimate absurdity of tracking down a lost stuffed dog. Though that one does go somewhere rather unexpected, come to think of it. In any case, they’re the sort of stories I’ve come to these books to read. Filled with a low-key camaraderie from the leads, a kind of low-key simmering energy which makes their loyalties and joy in each other obvious, while also not being afraid to let them run their mouths and give each other crap in an endless game of fat-chewing. Filled with vivid descriptions that manage to ensure that particular neck of Texas feels alive to me, feels real  and is unflinching in showing off the horror and the death in it, but the beauty as well.

And the plots have that blend to them as well. From a dead child in a bookmobile, to the aforementioned stuffed dog, to the stalking of a psychologist - there’s no turning away from the reality of crime, or the sordid nature of much of its motivations. But it’s never unfair - you always know as much as the protagonists do, and if you’re as baffled as they are, well, that’s probably just as well.And the stories themselves…well, they’re Lansdale in fine form. Smartly paced, they’ll keep you turning pages. But they’re also clever, twisty, a little dark, sometimes surprisingly poignant, and usually able to elicit some genuine laughter too. Because they’re looking at people, at Hap and Leonard, and also at all the folks around them, their family, their friends, and the psychology of the people and events they’re looking into.

I don’t want to touch too much on the boys themselves here. I will say that Hap and Leonard’s genuine affection for each other, a friendship that seems to have long ago swerved into brotherhood, is palpable on the page. And it makes me happy to see that kind of relationship brought to the fore - two men working side by side, sharing hope and loss and dreams, and managing to do it without being appallingly toxic. They’re good lads, those two, and the heart of every story is the way they know each other. Which isn’t to say there isn’t some shit-talking and some very hurtful remarks about vanilla cookies. But still. It is worth noting that the boys themselves remark on their getting older, and Hap, at least, is starting to feel the effects of the pressure of their adventures - and it’s wonderful to see these stories look unflinchingly at depression, at trauma, at the costs of violence - and do so in a way which still feel real and human.

Which isn’t to say it’s all doom and gloom. Far from it.in the end, these stories are fun. They’ll make you feel, though, and no shame in that, cry and laugh while you try and figure out what the heck is going on, and then nod knowingly when the criminals are revealed or comeuppances are issued.

So, to circle back toi the point I drifted off of up there: what is it? It’s more Hap & Leonard. Is it well written? Yes, yes it is. Should you buy it? Abso-bloody-lutely.