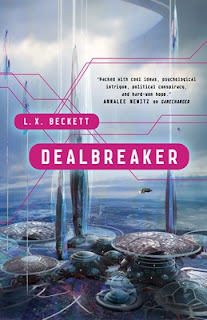 Dealbreaker is the second in the Bounceback series from L.X. Beckett. I really enjoyed the first of these, and was delighted to get my hands on the sequel.

NOTE: I’m going to try and keep this spoiler-free, as ever, but approach with caution.

Dealbreaker happens a generation after the events of Gamechanger. Humanity has got the attention of the universe outside it, which has come in and attempted a (failed) hostile takeover by economic means. Though still able to determine their destiny, humanity has found that when it reaches out to the stars, it’s asked if it has the necessary funds to make a purchase. Humans are the new kid on the block, and whether they can keep their prized autonomy is very much open to question. If Gamechanger brought us a post-climate exchange world, one in recovery, one where absolute surveillance went hand in hand with a culture of transparency, an economy founded on social capital, and crackdowns on hoarding, then Dealbreaker expands that world, brings different parts into focus, but keeps it just as alive, and just as fascinating. There’s so much going on here, so many criss-crossing webs of connection, of friendship, enmity, of bridges built and burned. Emergent AI are striding through humanity’s networks like ghosts - no longer afraid, no longer hunted, but recognised, with rights, needs and an agenda of their own. People are starting to claw back lives out from under the shadow of total climate catastrophe. And the world is coming to terms with a more sustainable existence, after decades of reconstruction. But all of this now plays out on a wider stage, as humanity reaches out for the stars, desperate to make its mark as part of the wider community, before something in that community scents weakness, and sends in the metaphorical gunboats. So the rebuilt economy is under strain, struggling to build out the technologies needed for us to be taken seriously and pay off the debts owed to do so to extraterrestrials with a less than wholesome interest in Earth.

Dealbreaker takes us to the stars, a strange panorama, filled with mystery and wonder in equal measure. The stumbling steps into a wider world are crafted with just the right amount of awe and discovery, blended with human courage , gumption, and a penchant for tasking unacceptable risks.

But even as we’re stepping out into the stars, there are older crimes keeping some of us back. Quiet, hidden histories of atrocity that are slowly bulging back out from under the rug beneath which they’ve been swept. If people are courageous and hopeful, they can also be filled with selfishness and spite. And Dealbreaker shows us that. Shows us a humanity at war in its conception of itself. In the outward looking FTL-nauts looking to secure the species a place at the table, and the shadowy oligarchs behind the curtain, trying to get themselves that seat, and let everyone else get trampled over on the way there. Dealbreaker is our story, humanity’s, and it’s in the faces of its heroes and villains that we see glimpses of ourselves, shadowy figures in broken glass behind the characters eyes.

Which is all a long winded way of saying that this is a sprawling, epic world, filled with stories, only some of which we’re privileged to know. But there’s so much here, in the rich and vivid detail, in the quiet moments between breaths, inm the broken skyscrapers covered in solar panels, in the FTL craft made of spit and duct tape, in the bright scalpels of monsters, and the slick patter of alien salesmen who definitely have a great deal for you. In the strikes and strokes of the social network made flesh, and in the whizzing simulacrum of the artificial intelligence community. It’s got a texture and heft to it which makes it feel true, which brings the world to mind, and lets you see and hear and breathe it in

The characters...well. Some of them are familiar faces, others less so. Frankie, of Gamechanger, now all grown up, and dealing with her trauma as best she can, is perhaps the closest thing to a protagonist. That said, there are other points of view - from AI, from aliens, and from some less than amicable others. But Frankie we know, at any rate, And she shines, she really does. From the first page, you can feel her anger bubbling away, feel her guilt pushing her in different directions. Feel the way she struggles to be good enough, fighting skirmishes against the demons of her own head, determined to save everyone in order to save herself. But she’s also fierce and proud, and filled with a love that burns inside and out. Her family, the close-knit polyamorous unit that helps shape her in the world, is warm and loving and has the sort of gently well-trodden affection of a relationship as comfortable as a well-worn boot. It has a joy to it, an acceptance that, again, makes it feel real. Frankie has her sharp edges, but she’ll fight for her family, and protect them, and be protected by them - perhaps despite herself. Seeing her grow over the course of the text is a joy, feeling her pain and sorrow and pleasure and happiness one word at a time. And seeing her shape herself under pressure, trying to be, if not the best of us, the best that she can be. Flawed? Definitely. A heroine? Absolutely.

Maude is another voice worth mentioning, a survivor of the atrocities of Gamechanger, now part of Frankie’s family unit. Maude has her own issues - of trust and memory. Of caution, and betrayal, trying to define who she is whilst grappling with a past which seems to slide away as she reaches for it. Maude is wracked with her own pain, with her own internalised protection, with a need for trust and walls that she’s still looking down from, rather than demolishing. But her pain is raw and personal and sharp on the poage, and her struggles to be better, and her refusal to just be what other people want  her to be, are inspiring. Between them, this dynamic duo make every page they’re on just so much...fun to read, be it through smart banter, cunning plans, or straight up risk-taking arse kicking. Or, er, locusts. But we’ll say no more about that.

Anyway. Dealbreaker. It has everything really. A grand concept that sweeps out from the page to enfold you in huge issues with a personal, immediate context. Aliens! Betrayal! Personal crises. Love, death, old truths coming to light. And humanity, battling against the dark to be its own version of its best selves. It’s a story which makes you feel hope. And right now, that’s a powerful story indeed.Go and give it a try - you won’t regret it.