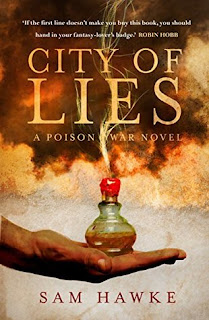 City Of Lies is about a great many things: Poison, politics, the moral and ethical obligations a society ha to those working within it, the quality of friendships and, er, more poison. The slow-burn narrative captured by attention and didn’t let it go, and the world drawn showed a marvellous depth of imagination; given this is Sam Hawke’s debut, the series it begins is off to a very strong start.

The story explores themes of the dichotomy and conflict between the urban and country as well; much of the text takes place within a sprawling city regarded (at least by its rulers) as a centre of socio-cultural enlightenment. A council of well-heeled nobles rules, and dispenses justice and economic largesse to their populace. The people have access to education, and guilds exist to allow the talented to make something of themselves. Or so the story goes. Things are, as ever, not that simple. The governance, the beneficence, the economy, the  social inclusivity of a ruling elite from a different background to the remainder of their population – all are, at the very least, on tenuous ground. Perhaps the largest fib in City Of Lies is the city itself – or at least the ideals it’s founded upon. The story isn’t afraid to use its characters to explore flawed assumptions, to question the sacred cows which this society has built, and to deconstruct them, block by block. The occasional murder is thrown in, too.

The city is glorious, in its way, in the evocation of the ideals it tries to match, even where it falls short. And in being a thriving metropolis of broken walls and soaring bridges, a living proof that co-operation and harmony can have positive results. That this is, if not a lie, at least contemporaneously somewhat wishful thinking, doesn’t give this world any less of a heart. There’s so much social complexity at work here – agricultural workers struggling with urban rentiers, representatives trying to create new guilds to allow people to earn a living in different ways, armies on the march – it’s breathtaking. It’s a lot to take in, but it sneaks up on you. Over the course of the book, the city will get under your skin – much like the poisons described at the start of a chapter.

If the world is fascinating, the characters are equally compelling. The heart of the book is friendships, and family ties – between a young aristocrat with an important role in government, his equally aristocratic friend, whose duty it is to ‘proof’ substances as a protection from poison, and the proofer’s sister, who, chronically ill, carries affection for them both. They’re an odd lot, these three, but their unbending faith in each other is the pole star of the narrative, and once which makes it an absolute joy to read. While we’re looking at the deeper themes of the text, while we’re looking at social inequalities writ small and large, or the minutiae of politics, or actual poisonings, or duels, or battles, the emotional resonance of this triad glues the text together.

The relationship of the three protagonists carries the warmth and depth of genuine friendship, of duty embraced with mutual affection. It’s a delight to see such friendships celebrated, and the positive nature of the emotions in no way decries their honesty and the truthful heft that they lend to the story.  It’s what gives the book heart. This is helped, in some ways, by the villains – such as they are.  For the antagonist here is a mystery – sowing disruption and lethal toxins from the shadows. Each character is thus a challenge; each pampered aristocrat could be wearing a mask, each Order-Keeper patrolling the streets a potential quisling.

To the author’s credit, each of the ensemble around our central group feels like an individual. Petty, spiteful individuals, sure. Duty-driven and socially suspect, absolutely. Acidic and unforgiving of the pride of the City? No question. But each has a distinct voice, and each carries a personal opacity which makes them more or less of a threat. Each smile may mask a villain – but of course, a scowl can too. If the City is founded on principles which may be undermined where they intersect with reality, the people withi the city are also cloaked in smaller, pettier lies – and in this, and in their efforts to be more or less than themselves, they’re thoroughly believable, and very human.

The plot is a complex web of mystery, focused, perhaps unsurprisingly, on lies, subterfuge, and poison. Each paragraph is a test of nerve, waiting to see if a silent murder has occurred. Each sentence carries a slow burning tension, perhaps akin to waiting for an antidote. I won’t get into it here, but suffice to say that City Of Lies has a lot going on. There’s enough byzantine factional politics for anyone, and if that’s not your jam, there’s more than a little swordplay and siegecraft as well.

There is some magic floating around in the background, quietly understated, but it doesn’t feel like a focus for much of the book – that focus is on the characters, on our trio and on their efforts to investigate a mystery and thus hopefully not die trying. The gently bubbling, seeping tension left me turning pages late into the night, and the tightly woven relationship between the central characters kept me turning them until morning. With that in mind, I’d recommend City Of Lies. It’s a vividly imagined, cunningly crafted debut, and an excellent read.